Book review - Wrath of the Lion

This thriller was first published by Jack Higgins under the penname Harry Patterson in 1964. This copy published by Signet in 1996. 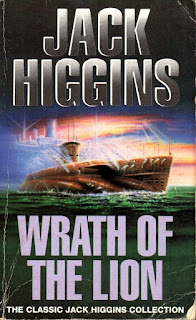 Set in the early 1960s, it features Neil Mallory, once known as the Butcher of Perak. It begins with a French submarine surfacing near a freighter. The submariners board the ship and murder a passenger. The motive is ‘death to all who oppose the OAS’. The Organisation armée secrète was composed of French dissident far-right paramilitaries who began an armed opposition to the independence of Algeria (the Algerian War spanned 1954-1962) from French colonial rule. OAS was formed in Spain in 1961 and assassination attempts were made on French politicians and even General de Gaulle. Algeria became independent in 1962.


Mallory teams up with French Deuxieme Bureau agent Guyon to track the submarine to the Channel Islands. They have to contend with the OAS commander Phillippe de Beumont. In the process, Mallory finds love. The best part of the book is a lengthy flashback to the Malayan conflict, where Mallory earned his nasty sobriquet.


Not one of his best, but it is a fast read, delivering plenty of pace and action; and of course there is the occasional betrayal. The ending was rushed, I felt, but satisfactory.
Posted by Nik Morton at Thursday, December 31, 2015