During my research for Cataclysm, I learned that, like Britain and the United States, China has one of the most pervasive citizen surveillance operations in the world. Besides some of the strictest internet access controls by any government, the country also boasts an expensive and sophisticated CCTV network (over 30 million cameras), on highways, in public parks, on balconies, in elevators, in taxis, and at sporting stadiums – a constant eye on the streets, searching for anything that could suggest criminal activity or a looming terror attack. They’re also intended to maintain ‘social stability’ – which could be construed as shutting up critics.


That fact posed a few issues for me. How could Cat hope to conspire against the Cerberus factory plants in China if everywhere is under surveillance? 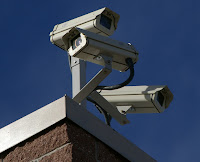 Well, monitoring such an immense system has to be a gargantuan task for any administration. So there must be many blind spots. And I’m assured by someone who has been to China frequently that the CCTV cameras do not intrude on normal day-to-day living. Just don’t openly plot the government’s overthrow…


There’s another aspect that affects the efficiency of the system.


Smog is now such a problem in China’s cities that its surveillance cameras can no longer see through the thick layers of pollution that choke the streets on an almost daily basis. The authorities believe that there is a real fear that terrorists could take advantage of these increasingly frequent hazes to carry out attacks and flee unseen.


Existing technology, such as the infrared cameras used by firefighters as they move through smoke-filled buildings, can help see through smog at a certain density, but when it reaches the concentration found on some Chinese streets, even that is shown to be useless.


Some experts have claimed that in many Chinese cities the pollution particles are so compressed that they block light almost as effectively as a brick wall. [Cat encounters thick fog, too.]


Naturally, there are human rights issues here, too. Even modest freedoms may be curtailed by such monitoring. Certainly facial recognition technology is being refined – and indeed is used in my novel Cataclysm. As yet, such technology is not effective in streets, due to the lighting variety – shadows, shade from buildings, passing vehicles etc. And there is no sci-fi style all-seeing eye … yet.