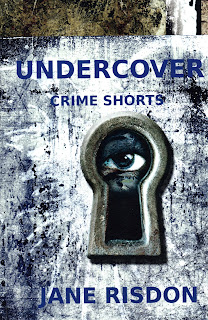 ‘Sweet Sable – the Red Siren’ is an enjoyable caper set in 1930s Hollywood, and Jane has captured the period and the jargon. Sable is a chanteuse some of the time – when she’s not seducing and then fleecing rich marks. She’s a fascinating character, yet 25 pages do not do her justice. Really, she has the potential to fill a book-length novel or novella. Certainly worth getting to know her – but hold onto your billfold!

‘Apartment 206c’ is also set in the States. China shares an apartment with Louise. While Louise goes out to work, China is a writer, usually draped over her laptop. This begins with a tense situation with noisy neighbors that then turns unpleasant. Before I got to the end, I did wonder if it was a variant on Rosemary’s Baby – but it wasn’t.

The best in the collection is ‘Murder by Christmas’. Deceased Tiffany Blunt has left an intriguing will. ‘Those who’d hoped to inherit didn’t, and those who had been invited to attend without knowing why were suddenly beneficiaries. It was all a bit odd, really.’ (p45) This certainly had the flavor of a Ruth Rendell suspense tale with a set of dysfunctional and amoral characters. Again, these 21 pages, while satisfying, promised the potential of a longer work. With the right director, the story could be a successful TV one-off.

‘The Watchers’ was a clever story, with several watchers involved. Candice, having recently broken off with her boyfriend Ollie suspects she is being watched. She’s of a nervous disposition which doesn’t help. Or is she being paranoid? There was more than one twist to this tale. Let us just say, it doesn’t end well…

‘The Honey Trap’ concerns an unnamed Second Secretary to the British Embassy. He appears to be propositioned at the Majestic Hotel and is only too willing to retire to the attractive woman’s room. Naturally, telegraphed by the title, he is suspicious about her motives. This is a dark piece, but not too graphic, and the conclusion is open to interpretation. Again, I felt that giving this tale added depth of character would have made it especially chilling; if someone is going to be murdered, perhaps the reader needs to know more about them, to empathize. Still, overall, unnerving.

‘The Look’ is playful and deadly. An unnamed woman responds to a dating website and meets the unnamed man for a drink and a chat and shared enthusiasm over photography. They both have ‘the look’. That’s the playful part. Then, slowly, irrevocably, it gets dark, very dark. Murder will out – and there is a reason for it. Oh, and it paid well – very well. It would be a shame to say more as that would spoil the story. Yes, this too could make a suspenseful longer tale, whether novella or novel. A neat amusing ending which echoes the story’s title.

Ms Birdsong Investigates Murder in Ampney Parva is an all-too-brief extract from a novel; there are at least two sequels in the works. Lavinia has ‘buried her real self, taking on the mantle of a hardened Madam – trafficker of girls.’ (p91) She is in a particularly disagreeable place, mixing with hard-hearted Eastern Europeans. The sample ends when she finds herself in a compromising situation that does not bode well for her future… Yes, we want to read on!

On the whole, there’s a wide variety of crime and murder offered within 92 pages which the reader feels impelled to keep turning.

Nik, thanks so much for taking the time to read and review, Undercover: Crime Shorts. I really appreciate your forensic attention to detail in my stories. I've been asked about writing full-length novels, or novellas, of the stories but I fear I may never get around to it. I need a clone or another four score years and ten!
Ms. Birdsong is a priority because my agent is waiting for the follow-up (two additional books), so I am working hard on them.
Thanks again, you are a star.
Jane xx

Thanks for replying - a rarity these days... Good luck with Ms Birdsong. :)