THE CALL – A novel that never was…

While on a school cruise ship MS Dunera around about 1963, I thought of a story idea: a young student hearing a call… and diving overboard to rescue the caller. He was considered lost at sea… but in fact survived and had many adventures…

From that evolved a series of drawings featuring the young man and a young woman he met – and continued having to rescue! Well, I was only fifteen! And I was clearly influenced by the books of Edgar Rice Burroughs. (See below for the drawings)

The Dunera was built in 1937 on the Clyde by Barclay Curle. Originally it was a troop ship then later was converted to a floating school by The British India Steam Navigation Co Ltd. 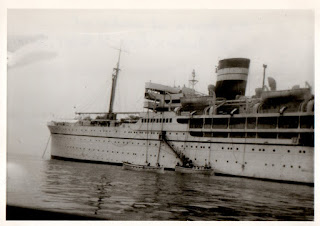 The ship had dormitory accommodation for the pupils together with classrooms, lecture theatre/cinema, library and deck space for sports. There was also accommodation for teachers and independent travellers. As a floating school it first set sail from Greenock, Scotland on April, 12 1961 and completed fourteen more trips in that year.

While onboard we visited St Helier in Jersey (Channel Islands), Vigo in Spain, and Lisbon in Portugal.

Here are some drawings of adventures that were never written about.

This picture was put on the art class wall by the teacher for several weeks;

he pointed out that all the wristwatches had the same time! 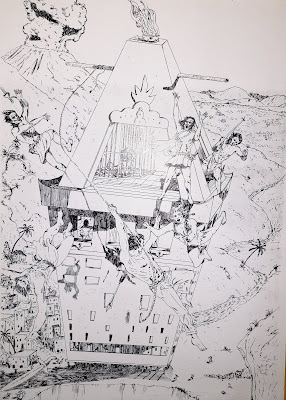 Good stuff and a lot of work. Write and publish the book.

You are a good illustrator Nik.
I was on two Dunera tours, Scandinavia and Spain/ Portugal.

Thanks for responding, Charlie and Anon. Yes, the school cruise ship's life was relatively short but clearly generated long-lasting memories. Ah, Charlie, so many books to write...! :) Nik

I was on the Dunera, too, but a few years after you. Your drawings are very talented and definitely worth keeping all these years. :-)

Thanks for the comments, Nancy. Appreciated. :)