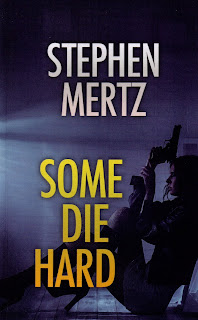 Stephen Mertz’s debut novel (1979) has been reissued by Wolfpack Publishing. It’s a hardboiled private detective novel in a similar stable to Ross McDonald. Rock Dugan is an ex-stuntman and now a gumshoe.

An incident draws Rock to the door of Susan Court, the daughter of a millionaire who is dying. She has a wastrel brother Tommy who owes a lot of money to the local powerful hood Murray Zucco. There’s the question of the old man’s will. Mr Carlander Court is reinstating Susan in his will and shutting out Tommy. Susan wants Rock to protect her father until the will is changed next day. She is fearful that Tommy will murder his father to get the inheritance and pay off Zucco.

There follows a death – a kind of locked-room mystery right out of John Dickson Carr, only with a difference. I won’t spill the beans – though the blurb tends to, just a little.

It’s clear that Mertz was learning his craft – for example, there are too many lengthy speeches by characters. But the flavor, the pace and the characters all add to an enjoyable mystery laced with wit.

The next Mertz book I shall read is Say It Was Murder. Looking forward to it.