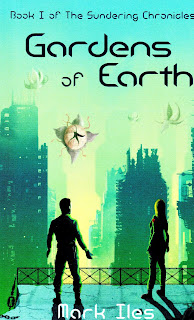 Book One of The Sundering Chronicles by Mark Iles (2021) is an excellent speculative fiction novel. It begins as if it’s sci-fi but evolves into a cross-genre conflation of fantasy, sci-fi and horror. Most definitely horror.

It begins on the ill-fated planet of Halloween where space troopers are combating the planet’s inhabitants. Steff Philips is with his members of the flight wing enjoying a meal when it all goes wrong, horribly wrong. Steff retreats to his room – but he isn’t safe there. ‘A rotting hand, with ribbons of flesh hanging from exposed bone, reached up from underneath his bed and snatched at his ankle.” The stuff of nightmares.

However, Steff isn’t the hero of this novel. That’s Seethan Bodell, a space fleet commander. When he’s not on duty and working overtime at the base, he lives in the boarding house of Mrs Maskill, a lady who has become his adoptive mother. Seethan is coping well even though he occasionally suffers from PTSD brought on by previous conflicts where he has lost men. Guilt is never far from the surface. But he employs his coping strategies to defeat the darkness.

Because the humans felt forced to retaliate with devastating effect, Halloween became a wasteland and the indigenous inhabitants – nicknamed the Spooks – escaped to form a massive fleet capable of attacking Earth in dreadful reprisal. And they seem unbeatable. Onboard one of the Earth space carriers is Admiral Woodward – a nod by Iles to Sandy Woodward who was the British task force commander in the Falklands War.

Yet there is one slim chance for humanity. Seethan is tasked with embarking on the mission that would alter history and even right the wrongs of the past in one fell swoop. He is accompanied by the fetching android Rose who was built in Bradbury City on Mars. ‘Her hair’s like spun gold, and her skin’s… well, porcelain. She has these wonderful deep-green eyes, ones you could drown in…’ (p95) Androids are not particularly liked by many humans; people feel threatened, despite the Asimov Laws of Robotics. Seethan’s is not one of those; he’s in love with Rose.

A rather distasteful suitor of Mrs Maskill is Alan. Seethan doesn’t like him: ‘he smells like Portsmouth Harbour when the tide’s gone out.’ There are plenty of humorous asides, but they’re never there merely for jokey effect.

Up to this point it is clear that Iles had experience in the armed forces and he clearly evokes the dangers and sheer horror of war, and the psychological damage suffered by many combatants.

Sadly, the event that Seethan triggers is not what had been planned. Instead, the result is the Sundering. ‘The Sundering left Earth’s reality torn.’ (p172)

Then, Iles really gets inventive. What had been a space military scenario is transformed into a quest for the sake of love, with a colourful environment, fascinating characters and beasts, and an overshadowing threat.

There are a good number of fine descriptions. I particularly liked ‘a shower of brilliant sparks to scatter like panicked fairies.’ (p116) And a saying from Seethan’s mother, which has resonance even today: ‘Don’t look back, you’re not going that way.’ (p137) And: Dragonflies as long as Seethan’s arms buzzed about like military drones as they snatched the butterflies in mid-air.’ (p174)

Did I mention horror? Yes, I did: ‘The thing … sat into the chair, it creaked as he sat back… one foot slowly tapping against the bare wooden floor. With each tap, small things fell to the floor and squirmed, wriggling their way towards the bed…’ (p125) Iles can do horror, sci-fi wonder, compassion, poignancy and full-blooded action.

No spoilers here, but there is a neat twist or two at the end, which several players did not see coming. While never preachy, the book says something about nature, conservation, aspects of love and hubris, as well as survival.

Although it’s Book One, Gardens of Earth tells a complete story, so the reader is not left hanging.