William Boyd’s 2012 novel Waiting for Sunrise was published a year before his James Bond outing, Solo. Both involve spies – as did Restless (2006); having said that, this is not a spy novel nor is it a thriller. 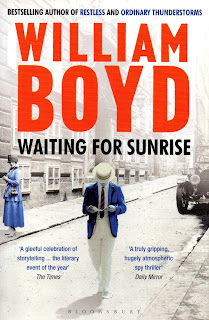 The book begins and ends with second person narrative, a literary device, as if the reader is personally viewing the scene through the director’s eyes. The bulk of the novel is third person point of view. However, there are also sections in the first person, ‘Autobiographical Investigations’ by the main protagonist.

Lysander Rief, an actor son of a deceased famous thespian, is undergoing therapy in Vienna in 1913; part of the treatment is for Rief to write down in a journal his ‘autobiographical investigations’. His problem is of the psychosexual kind. He meets the intriguing and beautiful Hettie Bull who miraculously solves his problem and then involves him in a scandal. He escapes the opprobrium with the aid of a couple of Foreign Office types – who then later call on him to return the favour. We’re halfway through the book before Rief is recruited as a spy. The method of his infiltration is contrived, to say the least, yet it does give us a powerful insight into aspects of trench warfare.: ‘star shells and distant artillery, the throat-clearing expectoration of machine-gun fire…’ (p227)

Later, when Rief returns to London, he is in the midst of a bombing raid by zeppelins, and these scenes are intense and dramatic. His time in London is devoted to rooting out a suspected mole. Again, the ending was contrived and a bit of a damp squib, which is a pity, because the writing and observational detail persisted in creating the impulse to keep turning the pages.

On the whole, Boyd is very good at description, painting a scene, and his character studies create realistic players. He is a pleasure to read. Rief's ex-girlfriend is appearing in a play, The Reluctant Hero. Now employed as a spy, he ‘felt envious, experiencing a sudden urge to rejoin my old life, to be back on stage, acting, pretending. Then it struck me that this was precisely what I was about to do. Even the title of her play was suddenly apt. It rather sobered me.’ (p214)

Good writers utilise the skills of their main characters; Rief’s acting isn’t simply a career label to stick onto him. ‘He was feeling surprisingly tense but was acting very calm, and he thanked his profession once again for the trained ability to feign this sort of ease and confidence even when he was suffering from its opposite.’ (p348) Excellent stuff.

Possibly the first appearance of the book title in the text is when Rief is stuck in no man’s land:
‘… the best course of action was to stay put and wait until sunrise. Then he might know what to do next.’ (p231)  Followed by: ‘… he tossed and fidgeted, punched and turned his pillows, opened and closed the windows of his room, waiting for sunrise.’ (p322)  And, the penultimate: ‘… he smoked a cigarette, waiting for sunrise. Sunrise and clarity, he thought – at last, at last.’ (p407) Finally, to hammer it home, ‘… and I hoped that sunrise that day would bring understanding and clarity with it – or at least clearer vision. And I thought I had it…’ (p419)

But of course we know that some sunrises occur in fog and then there’s no defined clarity; particularly where spies and double-agents are concerned…

A gripping, atmospheric novel, though flawed.

A very minor quibble. Rief’s ‘autobiographical investigations’ relate some conversations in this manner:
ME: I still have the ring…
BLANCHE: What are you trying to say…?
And yet another shows:
MUNRO: Not clever enough…
LYSANDER: I admit…
Here, it should have been consistent with other examples, and show ME not LYSANDER.

My comments on point of view can be found in Write a Western in 30Days (pp56-67), such as: ‘Second person narrative has its advocates, but it generally smacks of a literary device and doesn’t make easy reading, particularly when at novel length or in genre fiction. Here, the writer is speaking directly to the reader, even addressing him as “you”, as if he existed in the narrator’s world.’ (p58)