Book review - A Graveyard for Lunatics


Ray Bradbury’s 1990 crime novel A Graveyard for Lunatics is the second in a trilogy, preceded by Death is a Lonely Business and succeeded by Let’s All Kill Constance. 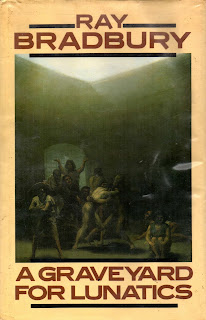 The cover depicts a detail from Goya's The Madhouse at Saragossa, 1794.

It’s 1954 and the young narrator is a scriptwriter for Maximus Films, a character that echoes Bradbury’s own worship of the Golden Age of Hollywood. Adjacent to the vast film studio complex is Green Glades Cemetery.  Here, one rain-sodden night he witnesses a revelation.

‘I heard a ghost sigh somewhere, but it was only my own lungs pumping like a bellows, trying to light some sort of fire in my chest.’ (p9)

The revelation was a lifelike dummy of the dead studio head J.C. Arbuthnot, who died twenty years ago in a car crash. He enlists his best friend Roy Holdstrom (an inventor of science fiction sets, monsters and special effects) to solve the mystery. On the way he meets wildly eccentric characters, among them a drunken ham Shakespearean actor, J.C., who states, ‘I do not dare, sir. I am.’.

It’s clear that these books are Bradbury’s reminiscences of his time when a young teenager hovering around the periphery of the movies. His early influences were King Kong and the Hunchback of Notre Dame.

‘It was like having an affair with Kong, who fell on me when I was thirteen. I had never escaped from beneath his heart-beating carcass.’ (p4)

Bradbury would spend many a day in front of the studio gates of Paramount and Columbia hoping for autographs. He’d watch film stars come and go at the Brown Derby restaurant – and all these places figure in this novel. One of the tragic characters, Clarence is clearly modelled on himself, though older.

‘Instantly my soul flashed out of my body and ran back. It was 1934 and I was mulched in among the ravening crowd, waving pads and pens… pursuing Marlene Dietrich into her hairdresser’s or running after Cary Grant Friday nights…’ (p15)

This book is dedicated to a few folk of his acquaintance, among them some deceased: Fritz Lang and James Hong Howe. And his friend Ray Harryhausen, who was alive when this was written. Roy Holdstrom is modelled on Harryhausen, and the character Fritz Wong is an amalgam of Lang and Howe. The narrator’s investigator pal Crumley is named after the crime writer James Crumley. Manny Leiber (who intended cutting Judas from a Biblical film because he didn’t want to make an anti-Semitic movie!) may well be named after fellow science fiction author Fritz Leiber. There may be other allusions I’ve missed.

The tale is typical Hollywood scandal and cover-up. Nothing new there, then. Fittingly, Crumley states, ‘Sometimes dead folks in graves have more power than live folks above…’ (p186)

The beginning contains some excellent imagery and writing. It starts with the narrator observing there were two cities within a city: ‘one moved restlessly all day while the other never stirred. One was warm and filled with ever-changing lights. One was cold and fixed in place by stones… Maximus Films, the living, and Green Glades Cemetery, the dead…’ (p3)

‘Ten thousand deaths had happened here, and when the deaths were done, the people got up, laughing, and strolled away. Whole tenement blocks were set afire and did not burn…’ (p3)

And: ‘From here Dracula wandered as flesh to return as dust. Here also were the Stations of the Cross and a trail of ever-replenished blood as screenwriters groaned by to Calvary carrying a backbreaking load of revisions, pursued by directors with scourges and film cutters with razor-sharp knives…’ (p4)

Besides transposed reminiscences and mystery, there’s humour: they were looking at a huge display of coffins. ‘How come so many?’ I asked.
‘To bury all the turkeys the studio will make between now and Thanksgiving.’ (p37)

And when turning up at the Brown Derby, the maitre d’ accosts them:  ‘“Of course, you have no reservations?” he observed languidly.
“About this place?” said Roy. “Plenty.”’ (p59)

When they confront ‘the Beast’, the lengthy description is poignant. ‘… a face in which two terribly liquid eyes drowned, swimming in delirium, could find no shore, no respite, no rescue… So the eyes floated, anchored in a red-hot lava of destroyed flesh, in a meltdown of genetics from which no soul, however brave, might survive. While all the while, the nostrils inhaled themselves and the wound of mouth cried Havoc, silently, and exhaled.’ (p63)

While Bradbury didn’t shy away from acknowledging the grim underbelly of the world in this book and others, yet he preserved an incorrigible innocence too, encapsulated by Constance, a faded movie star, telling him: ‘How lucky to be inside your skin, so goddamned naïve. Don’t ever change.’ (p131)  She also makes the observation, ‘That’s no hospital. It’s where great elephant ideas go to die. A graveyard for lunatics.’ (p140); hence the book’s title.

Whimsical and sometimes silly, with a plot that barely hangs together for all those depicted years, it’s still a worthy addition to the Bradbury collection, and as hinted at above there’s much to admire. However, if you’ve never read any Ray Bradbury, this is not the best place to start.