Give the police guns

The latest terrorist atrocity in Westminster rightly evoked anger, compassion for the injured and the bereaved families, and inevitably calls for all British police to be armed.
This latter consideration strikes a memory chord. In my novel The Bread of Tears, my heroine Sister Rose dwells on that subject:

The Abbess was kneeling with her back to the door, praying in front of a rack of lit candles. She turned her head slightly towards me. ‘Please be patient, Sister Rose, while I finish my prayers for our dear Sister Leocritia.’ Her New York accent was still very strong even after many years in England.
I nodded agreement and she turned back to the candles.
When I joined Northumbria Police I was Maggie Weaver – though Mike called me Meggie – and I had still attended church services about once a month. For two years I was in their armed response unit and when I shot dead my first criminal – David Paul Duggan, a name I wouldn’t forget, it was like remembering your first love’s name – I lit a candle for him. At the time I had no doubt that as a multiple murderer he deserved to die, but I still hoped his soul might find peace. Then my weapon was seized and sealed for forensic checks and swabs impregnated with a chemical preservative were taken from my hair, face and hands and my clothing packaged and sealed. This was to verify that it was my bullet that took Duggan’s life; perhaps the rule-makers had seen the film The Man who shot Liberty Valance. I then waited for the inquiry to look into the shooting – self-defence, with two senior officer witnesses – losing my sleep and some weight in the process. When I was cleared, I was reassessed to remain an ‘authorised shot’.
For my second killing – Morgan Sugden – I also lit a candle and offered a prayer. After more months of inquiry, I was in the clear again. At that point the post-traumatic stress was getting to me so it was mutually decided that I’d leave the ARU and continue my police work without a weapon.
Even in these violent times, when thousands of British bobbies find themselves armed for one call-out or another, most gun-carrying police officers rarely draw their weapons and in fact do not kill many criminals. It was just my bad luck, to be in a situation where the gun was mightier than any words I could muster. I was commended on both occasions, because I saved other people by snuffing out the lives of two men, lives extinguished as easily as a candle.
Some months later, I was chasing an armed robber, Bill Reavley, over the rooftops when he fell and was seriously maimed. That was the day when I decided to keep away from the church. I convinced myself that I could do without that added angst. The priest, Father Collins, telephoned me once, and then we lost contact. Staying away was easier than going back with excuses after a long lapse: that guilt thing again.
If someone had told me then that I would become a nun, I’d have sent for the men in white coats.
The Abbess stood and faced me, her large pectoral cross glinting in the candlelight. ‘I believe you neglected to turn the other cheek earlier this evening, Sister?’ Shining brown eyes sparkled, either with anger or amusement. I didn’t know which, though under the circumstances it was probably the former. (pp45-47) 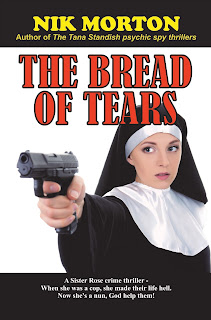 Available as paperback and Kindle on Amazon sites here

Before taking her vows, Sister Rose was Maggie Weaver, a Newcastle policewoman. While uncovering a serial killer, she suffered severe trauma, and after being nursed back to health she becomes a nun. In her new calling she is sent to London to run a hostel for the homeless. Here, she does good works, and also combats prejudice and crime.
As she attempts to save a homeless woman from a local gang boss, events crystallise, taking her back to Newcastle, the scene of her nightmares, to play out the final confrontation against drug traffickers, murderers and old enemies in the police.
She finds her spiritual self and a new identity. She is healed through faith and forgiveness. It’s also about her surviving trauma and grief – a triumph of the human spirit, of good over evil.

This is a gritty and at times downright gruesome thriller. Written in the first person, Morton has achieved a true sense of feminine appeal in Maggie, the narrator, and despite her religious calling, she comes over as quite a sexy woman… I found myself totally empathising with this full-blooded, gutsy woman... All the characters and horrific events in this crime thriller are extremely visual and well-drawn, making this a riveting read. It would make a brilliant TV series! – Jan Warburton, author of The Secret, A Face to Die For

… Don’t think that once you’ve recovered from the grim murders of the opening chapters you can settle down to a straightforward detection model… As sadistic as Hannibal Lector, this killer will scare you – be warned! – Maureen Moss, author of More to Life.

Nik Morton knows how to write a thriller. The characters are all well drawn, especially Sister Rose… There is a serial killer who will make your spine tingle in Jack the Ripper fashion... I think this is a first rate crime thriller, which also delivers a strong message. – Keith Souter, author of Murder Solstice

… The stuff of all male fantasies rolled into an incredible bundle. And what a novel! Mr Morton skilfully delivers a well-crafted thriller with more than a little intrigue, a love story in the making and some subtle twists from start to finish. The final fifty pages or so seemed to turn by themselves such was the pace of the climax of the story. I for one have fallen for this deep thinking female. – Ken Scott, author of Jack of Hearts, ghost-writer of Do the birds still sing in Hell?