The official companion to the TV series, Murdoch Mysteries (2015) is a lavish reasonably priced hardback with dozens of colour photographs. Ideal for any fan to own. The authors Michelle Ricci and Mir Bahmanyar were given much assistance from the cast and crew; this book covers series 1 thru 8, so there will be spoilers. As usual, Titan Books gives us an excellent book in every respect. 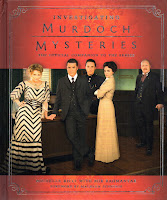 There’s a foreword by the author of the books, Maureen Jennings, enjoying how her characters are being brought to life. The introduction is by Christina Jennings (no relation!), Executive Producer and Chairman & CEO of Shaftesbury films, explaining that some twelve years ago Maureen Jennings’ publisher sent her the books to read, and she decided to adapt three books as TV movies. Although the adaptations were faithful to the books, there was one exception; the invention of another character outside her comfort zone, just like Murdoch, so coroner Julia Ogden was created. The films were successful and the broadcaster was keen for a continuing series to be produced. It was decided to depart from the darker tone of the movies, ‘more Jules Verne, less Dickens’, and introduce steampunk and humour, with knowing nods to the future, and of course there would be romance. Happily, the team assembled provided all that, and more, from good writing, brilliant Victorian and Edwardian sets, to excellent acting.

There are fascinating insights into the characters, Victorian Toronto, and the inventions of the time depicted.  The Toronto police were formed in 1859. By the time of the start of the series (1895) the police have all-night patrols, a mounted unit for outlying areas and to control speeding horses! Bicycles for patrols were introduced in 1894, and as we know Murdoch was a keen cyclist. Up to the early 1890s, the police were also the main source of ‘social services’, until humane societies came on the scene.

We are presented with blueprints of Police Station No.4 and the morgue. And Prime Minister Stephen Harper appeared as a desk sergeant. We’re given an insight into the music, too, which is an important aspect of the series, helping to create the mood.

Yannick Bisson (Murdoch) does not, has never, and will never wear mascara or any eye makeup, we are told. Those distinctive eyelashes have been with him since he was born! It could have been a daunting prospect to audition for a character that had already appeared in three TV movies. However, executive producer Val Coons had declared he was looking for someone different, He read about three times to get the part – which he has definitely claimed as his own over eight series.

Considerable coverage is given to the costumes, which again have to reflect not only the period but the characters. The offices, and all the other sets, are painstakingly created to evoke that period feel.

All the main characters are covered in some depth – Julia Ogden, Constable George Crabtree, Inspector Thomas Brackenreid, and Doctor Emily Grace. Then we meet their friends and foes, too, all of whom grow in depth as the series moves forward, not least Chief Constable Percival Giles, tycoon James Pendrick, spymaster Terrence Meyers and arch-enemy James Gillies, among many others.

There’s an intriguing blueprint of Pendrick’s electric car, ‘The Pendrick Bullet’, which took four months to perfect instead of the usual two weeks for inventive props. And it worked, as shown, with the actors in the cab!

Lastly, we’re given a year-by-year account of the attraction, disappointments, travails and on-off courtship of William Murdoch and Julia Ogden.

Every year, the writing staff  meet a number of months before the next series goes into production and they develop stories and ideas. We’re given a fascinating overview of how a storyline comes together – the 100th episode, in fact – and how the writers lay out a particular story with all the specifics – the beats – of what happen in each scene. They have to attend to logical progression, clues, red herrings, humorous interludes. The beat sheet is the guide; this becomes 15 pages of prose, scenes in paragraphs. It’s then read and revised and approved and then it becomes a 50-minute script.

As the back-cover blurb says, this is a treasure trove for fans of the series.
Posted by Nik Morton at Friday, March 10, 2017