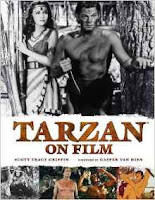 It begins with a foreword by Casper Van Dien, the twentieth actor to portray Tarzan, offering a few anecdotes from his filming of Tarzan and the Lost City. Throughout, there are many other fascinating insights and anecdotes concerning the actors, actresses and directors. The book is a feast for Tarzan fans and for anyone fascinated by the movie business.

The Tarzan franchise was the most profitable in history until the James Bond movies took off in the 1970s. The only other fictional character to have been a serious contender for the number of movie and TV adaptations is Sherlock Holmes.

Edgar Rice Burroughs’ first Tarzan story was published in 1912 in magazine format and subsequently as a novel. Twenty-three novels followed. It was inevitable that this iconic character would find himself on the silver screen. In 1918 the silent movie appeared, Tarzan the Ape Man, starring Elmo Lincoln. As we know, Hollywood didn’t really buy into the complete ape-man, only aspects of him. Until relatively recently, he was presented as a grunting, monosyllabic strong yet simple man, while in the books he possessed a remarkable inherited intellect, teaching himself to read and speak several languages, including French, English, German, Arabic, Dutch and a host of African dialects.

The first talky Tarzan film was Tarzan the Ape Man (1932), starring former Olympic swimmer Johnny Weissmuller; he appeared in twelve Tarzan movies and is still fondly regarded by fans. The scripts required the ape-man to appear a noble savage capable of only speaking broken English. One exception was the Burroughs co-produced The New Adventures of Tarzan (1935), starring Herman Brix (also known as Bruce Bennett). The “me Tarzan, you Jane” characterization persisted until the late 1950s, when producer Sy Weintraub produced Tarzan's Greatest Adventure (1959) featuring Gordon Scott. It must have been strange for Scott to present an ‘educated’ ape-man having already starred in four ‘monosyllabic’ Tarzan films. The Weintraub productions portray a Tarzan that is closer to Edgar Rice Burroughs' original concept in the novels; subsequent outings have maintained that stance with Ron Ely et al.

There are interesting biographies of the actors and actresses who played Tarzan and Jane over the years, and others besides. Despite the scripts, the stories and actors brought in the audiences in their droves. Each actor added something to the myth. Take, for example, Jock Mahoney, ex-stunt-man and TV’s Range Rider, who was the oldest actor at 42 to accept the legendary loin-cloth. He was suggested to replace Weissmuller and Lex Barker but didn’t take the role until 1960, superseding Scott. ‘Mahoney added 20lbs of muscle to his 6’4 frame, expanding his chest to 50” atop a 31” waist, while maintaining his lean corded appearance at 215lbs.’ It was just as well that he was fit. While filming Tarzan’s Three Challenges (1963) he was required to swim in the Klong River in Thailand. The river was polluted with human waste and rubbish. He swallowed the water and suffered dysentery, dengue fever and pneumonia, his weight plunging to 175lbs, finishing the film quite gaunt. The show must go on, indeed: ‘Following the final sequence, the delirious Mahoney, who was fainting several times a day, was rushed back to the hotel where co-star Woody Strode put him in an ice bath and fed him antibiotics like candy.’ Strode said that anybody but Jock Mahoney would have died. He took two years to recover his health and went back to work (sans loin-cloth).

Also covered are the two 2016 movies The Legend of Tarzan and the animated Netflix series Tarzan and Jane.

Besides the many still photographs, there are numerous film posters; indeed, some of the older ones are frankly poorly illustrated, but of their time.

Even after almost a hundred years, the movie Tarzan is still a phenomenon and this book does the franchise justice. A collector’s item, to be sure.
Posted by Nik Morton at Friday, January 13, 2017