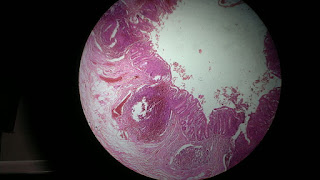 Histology of human appendix - Wikipedia commons (Jatheesh Mohan)
For many years the appendix has been considered a useless organ, a hangover from our evolution; believed at one time it might have had a function, but is now vestigial.

Yet according to a report published by a researcher of the Midwestern University in Arizona it is suggested that when the gut is affected by unwelcome bacteria the appendix can help good bacteria to grow and recolonize the digestive system. It seems the appendix has a higher concentration of lymphoid tissue, which is vital to the immune system. So, it isn't useless, after all.

In the middle of last century there was a minor trend to whip out the appendix for the slightest excuse; the same applied to tonsils and adenoids. Over-zealous surgeons preempted any risk of appendicitis, since that had the potential to cause fatal infection.

In the 1970s I wrote a science fiction story that extrapolated the above trend, in effect anticipating the discovery that the appendix isn't useless but dormant until needed. The story was p
osted in my blog over two days, here:

Gifts from a Dead Race part 1

Gifts from a Dead Race part2

I am trying to keep all my parts as long as I can. Except for three teeth, so far so good.

Glad to hear, Neil. One wonders if those bits get into the hands of witches and warlocks, what they will conjure up...?