Book review - Love Among the Haystacks 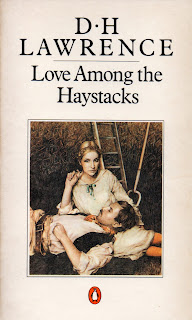 ‘Love among the haystacks’ is a well-observed bucolic episode in the lives of two brothers, Maurice, the youngest, and Geoffrey. It suffers from the use of dialect, which slows the pace and hinders the reader’s comprehension. The brothers are working in the fields, stacking hay. The local vicar joins them briefly accompanied by his children’s governess, a Pole, Paula, who is about the same age as the brothers. Accidentally on purpose, Geoffrey topples Maurice from the haystack; fortunately, he survives the fall and is presently administered to by Paula: ‘Maurice lay pale and smiling in her lap, whilst she cleaved to him like a mate. One felt instinctively that they were mated.’ (p18)

Geoffrey befriends Lydia, the wife of a tramp who sponges off the field labourers. Lydia’s story is a tragic one, told in the barn while the pair shelter from rain. The boys get their girls.

‘The Lovely Lady’ concerns the unpleasant Pauline Attenborough, 72, her niece Cecilia and her son Robert. Strange, that of all the names to choose, Lawrence opts for Paula in the above story and Pauline in this one. Pauline was ‘lovely’ in the sense that she appeared to most people to be only half her age in looks. Robert’s elder brother died in odd circumstances. Cecilia is attracted to Robert, but his domineering mother is in the way. The only person Pauline ever loved was herself. A story about power and lost love.

‘Rawdon’s Roof’ is a rather slight tale. Rawdon insisted that no woman would ever sleep again under his roof. Laced with wry humour: ‘One looked at the roof, and wondered what it had done amiss.’ The reason for Rawdon’s ire is a failed love affair, of no great consequence.  A little irony and an amusing confusion of names are not enough to quicken interest.

‘The Rocking-Horse Winner’ is known as a ghost story, which is a shame, as that fact detracts from some of the surprise. It was published in The Ghost Book edited by Cynthia Asquith.  A beautiful mother found she could not love her children – a boy and two girls. There was never enough money for them to maintain their social standing in the town. ‘The house came to be haunted by the unspoken phrase: There must be more money!’ (p82) The family seemed to have no luck in the money stakes. Uncle Oscar visits regularly and catches young Paul on his rocking-horse, riding a ‘winner’ in his imagination. Then he announces the name of the winning horse – Sansovino at Ascot, which won last week! Paul has a strong affinity with the butler, Bassett, who likes a flutter on the horses. Before long, Paul’s racing on the rocking-horse suggests winners of races yet to be run, and both Bassett and Paul and eventually Uncle Oscar dabble successfully. Paul is striving to grasp the luck that his parents lack, so they can be happy. It ends tragically.

‘The Man Who Loved Islands’ is about Mr Cathcart, who bought an island and was master of all he surveyed. There also dwell in a few cottages an old married couple, a widower and his son and two daughters. So he wasn’t quite alone. Financial circumstances prompted the islander to move to a smaller island, where he took the widower and his daughter to work for him. On this second island ‘there were no human ghosts, no ghosts of any ancient race. The sea, and the spume and the weather had washed them all out, washed them out so there was only the sound of the sea itself, its own ghost, myriad-voiced, communing and plotting and shouting all winter long.’ (p110) He has sex with the daughter, Flora, and she becomes pregnant. He flees to a third island, wanting to be stripped of humanity, wanting nothing to do with his fellow men and women. He seeks emptiness. A wasted life.

‘The Man Who Died’ was originally titled ‘The Escaped Cock’. There are echoes from the previous story: ‘In his own world he was alone, utterly alone. These things around him were in a world that had never died. But he himself had died, or had been killed from out of it, and all that remained now was the great void nausea of utter disillusion.’ (p130) The dead man walking is a resurrected Christ who falls in love with a priestess of Isis. It ends with the phrase ‘Tomorrow is another day.’ – the same ending found in Gone With the Wind!

I’ve read a number of D.H. Lawrence’s books and found this one a disappointment. He distances himself from the characters, and tells the stories rather than shows us through emotions. Yet his observation of nature is excellent, so much so that you can almost smell the flowers, feel the stubble of the cut wheat and the damp presence of rain and sea surf.

The cover of this copy (1981) was one of a series by Yvonne Gilbert.