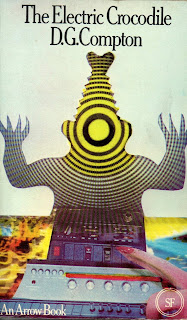 D.G. Compton’s science fiction novel The Electric Crocodile (1970) depicts a near-future Britain that’s subsumed within the Federal European government, the centre being Switzerland, with the flags of the member nations fluttering (p37). The currency is in marks. We don’t know when this future is, though there’s a hint: ‘Pavlov found out how to interfere with its (the brain’s) function over seventy years ago.’(p153) As Pavlov received his Nobel Prize in 1904 (he died in 1936), the story probably takes place in a ‘future 1970s/1980s.’

As with any near-future novel, some inventions are not going to happen in the real world and of course some inventions won’t have been thought of by the author. This doesn’t matter; it’s fiction, an alternate reality.

Matthew Oliver is married to Abigail. It’s significant that they both have Biblical names. Abigail is a devoted Catholic, Matthew pays lip service. Churches are virtually social clubs. Yet there’s an underlying current of God vs machine in the subtext.

At one point, Matthew drives past ‘a shopping complex and a self-service battery station. A hundred or so batteries were on charge in open-fronted racks’. (p37) Matthew’s car had been on charge all night and had a good thirty hours of life in it. So predictions of electric cars were viable then, anyway; they’ve just taken longer to evolve into practical use. Other things in this ‘future’ include laser pistols (Matthew has a license for one) and access passes that are checked in a scanner. Smoking is not frowned upon, since ‘the health risk has been beaten.’ (p51) And cancer was controlled (p93). Now, London is a Limited Traffic Zone… The big Italian manufacturers’ lobby had forced through safety legislation in Geneva that made 80% of not-new cars illegal. (p52) The television is shortened to ‘the tell’. And, perhaps surprisingly, people still write and sign cheques. And they use landline telephones, which are capable of producing ‘phonoprints’. Now, the Nevershave hormone treatment was available, which promised that – you’d never need to shave again!

Matthew has been recruited to join the Colindale Institute, which is guarded by a force field fence, which could withstand the onslaught from a two-metre laser. All workers there and their families must accept the presence of microphones in their homes and anyone leaving the grounds is to be accompanied by a so-called tail, in Abigail’s case, Mrs Foster.

The Colindale project, non-political, belonging to the European Federation, financed by central government, collects scientific information, catalogues and freely disseminates it, aimed solely at improving the welfare of humanity… (p47) That’s the official version, anyway. There have been two suspicious unsolved deaths; Matthew is replacing one of the deceased.

The computer Matthew and the team work on is called the Bohn. It still uses tapes and its output is via teleprinters. Their work is secret, involving intelligent imaginative extrapolation. As the Director of the project, Professor Billon states, ‘People in a democracy dislike being told what is good for them.’

Apparently,’ the social balance is precarious, sustained by oblique oppression. Democracy is eroded almost beyond recognition… We’re leaderless…’ Billon believes that the Bohn can supply that leadership, and can meet the need of the people. (p151)

Middle-aged alienees were demanding the vote back, with placards ALIENATION NO CRIME, and PENSIONERS NOT OUTCASTS.  ‘People in general had little sympathy with alienees and their conditional pensions – being alienated was no more than an excuse for being bone idle. The idea that work was a good thing in itself lingered tenaciously, no matter how much the experts told people it was out of date… Usually alienees demonstrated against compulsory education for their children or in favour of better housing.’ (p92)

The title is gleaned from this: ‘In 1933 a laboratory was built for the physicist Pyotr Kapitza. For its façade he ordered the head of a crocodile in steel. “The crocodile of science cannot turn its head. Like science it must always go forward with all-devouring jaws…’ (p96) A more prosaic explanation can be found here

And perhaps the Bohn can manipulate scientific discovery, change the future even?

So, an interesting socio-political science fiction novel that deals with commitment, love, betrayal, hubris, paranoia and the soul-crushing homogenous federal state.
***
Compton’s most successful novel is probably The Continuous Katherine Mortenhoe, a highly affecting piece (which was made into the film Death Watch); it was one of my favourite science fiction novels (though I have many favourites!)

Style: Straight-forward. Certain sections switch viewpoint and we snatch the occasional comment twice, but perceived from a different listener; like echoes; it’s a neat little touch and isn’t overdone.

Cover (1976): I’m not a great fan of psychedelic covers. The title perhaps suggests something like this, but I don’t find it appealing.