The Law of Chaos - the multiverse of Michael Moorcock


Michael Moorcock was born in 1939, and began writing in the 1950s and is still at it. Indefatigable, prolific and influential.

Jeff Gardiner’s comprehensive appraisal of Moorcock’s writing, The Law of Chaos is one of those ‘must read’ books for any fan of Moorcock, fantasy or science fiction, and even mainstream/literary fiction. 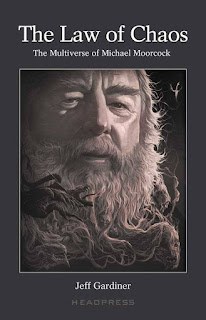 “This new book, the latest Moorcockian meteorite to flash across the heavens, is a timely reminder of the scope, depth, heart and magnificence of an author with numerous readers, bright-eyed fans, global correspondents, but far less mainstream acknowledgement than he deserves. The glory of the work, in its astonishing reach and range, is that it can be freshly excavated by every rising generation” - Iain Sinclair

From Jerry Cornelius and the Eternal Champion fantasies to Pyat and more recent novels, The Law of Chaos is an entertaining and accessible reader’s guide that explores the life and achievements of Michael Moorcock, one of modern literature's most influential figures. All Moorcock’s works are examined and discussed in detail from early fantasies to his later philosophical novels. With an introduction and other material by Moorcock himself, The Law of Chaos travels the moonbeam roads through the enigmatic multiverse of a celebrated literary icon.

Here is an extract from Jeff’s introduction to The Law of Chaos:

Fantasy writer Angela Carter called Michael Moorcock ‘the master Storyteller of our time’ — a well-deserved title for an author who has influenced the literary world for well over fifty years. Carter, herself an avid reader of Moorcock, was keen to celebrate the importance of Moorcock’s work. In her enthusiastic review of Mother London in the Guardian, she concludes that: ‘Posterity will certainly give him that due place in the English literature of the late twentieth century which his more anaemic contemporaries grudge; indeed, he is so prolific it will probably look as though he has written most of it anyway’.

Michael Moorcock is one of Britain’s greatest writers and he is possibly the most consistently experimental author in the world of fantasy literature. Not only did he practically invent modern British fantasy and reshape science fiction as an editor, but he is also an exponent of mainstream literature. While he, ironically, rejects the notion of being a genre writer, he is probably most famous for his fantasy hero Elric the albino, and for the science fiction icon of 1960s psychedelia, Jerry Cornelius.

In The Encyclopaedia of Fantasy, John Clute calls Moorcock, ‘the most important UK fantasy author of the 1960s and 1970s’. This is misleading, as he continues to write prolifically into the twenty-first century and it could be argued that his later novels are amongst his best work. Clute does, however, suggest that Moorcock is ‘altogether the most significant UK author of sword and sorcery’ and it is probably for his interlinking Eternal Champion novels that he will be most widely remembered.

The extent of Moorcock’s popularity is demonstrated by his worldwide following, led by an active international appreciation society, The Nomads of the Time Streams, and by the fact that his work is translated into many languages. Type his name into any search engine on the internet and you will encounter innumerable web sites that pay homage to him. What is most impressive about Michael Moorcock is that he has continued to produce novels, stories and non-fiction to such a high standard.

Michael Moorcock has won two World Fantasy Awards, including one in 2000 for Lifetime Achievement; a Nebula award; the Guardian Fiction Prize; a John W. Campbell Memorial Award and even a nomination for the Whitbread Prize. He also has a collection of six British Fantasy Awards: four August Derleth Awards, one for the short story category and, of course, the 1992 Special Award for his Lifetime Achievement. In 2002 he was inducted into the Science Fiction and Fantasy Hall of Fame.

Moorcock has about 100 books to his name, some of which are republished and retitled editions of earlier works, and this can prove bewildering to the uninitiated. My own attempt to bring a semblance of order to this chaos can be found in my Moorcock bibliography at the back of this book.

While his books are still categorised under fantasy or SF, this doesn’t fully represent his whole oeuvre, which is perhaps better labelled as slipstream or fantastic realism. Moorcock has written about fantasy forms in literature in his book, Wizardry and Wild Romance, one of the best books about fantasy by a fantasist, and he both acknowledges and proves through his own writing that fantasy is an important and often under-valued art form.

Fantasy creates a tension between what is real and unreal, and this echoes Moorcock’s balance between law and chaos. While Moorcock acknowledges the part that fantasy has played in his own success he does admit: ‘I have difficulty defining “Fantasy” as a readily definable genre — or frequently even as an element. I don’t believe that any technique or method is more or less useful than another — everything depends upon individual human talent in the end.’

His dislike for generic terms is expressed in the following way: ‘I don’t believe there is such a thing as fantasy or science fiction or detective fiction and so on. I think there are certain writers who in their field shine and in every one of those fields you’ll get some good writers emerging. Sometimes the field itself can limit the writer’s work and then frequently the writer does something about it.’

Moorcock is a protean writer, whose work transcends literary and generic boundaries; like Charles Dickens, his novels are, paradoxically, both popular and literary. His writing covers fields as far ranging as romance, heroic fantasy, science fiction, fabulation, surrealism, popular fiction, satire, allegory, fantastic realism, postmodernism, magic realism, non-fiction, rock’n’roll, comics and even cinema. His novels defy categorisation because they are greater than the limitations of the critic’s vocabulary. As a ‘literary’ writer Moorcock shows artistic ability in his myth-making and story-telling; his creation of intriguing characters; the subtle irony and ornate vocabulary; an exploitation of metaphor and allegory; and his presentation of imaginary landscapes and emotional relationships. However, his greatest desire is to be a popular author.

He first came to prominence in 1964 as the editor of New Worlds magazine with his radical editorial approach that alienated many science fiction fans, but also won him great respect as a writer of vision whose vocabulary and ideas were second to none. His own early stories best exemplify his desire to experiment with structures, themes and language. It was in these early stories that he began to develop the symbolism and subjects that continue to dominate his later writings.

Michael Moorcock is incredibly prolific and what causes the most confusion is the interlinking nature of all his novels. Most of his books fit into a particular mythos or are related to a series of novels, although which one or how is not always immediately obvious. Beginning with a brief autobiographical sketch, this book examines Moorcock’s early career as an editor for the avant-garde literary magazine New Worlds, and then evaluates his early fantasy and the famous world of Jerry Cornelius that arose from the magazine. Then each chapter discusses a major work or series and attempts to do so in chronological order; that is, by the date of the first book in each series. Any confusion might be caused by the fact that Moorcock does not write his books in any seemingly logical order, and so many of his novels and short stories are repackaged and reprinted.

In this book you will find biographical detail, because to appreciate Moorcock’s work means understanding the writer. Moorcock’s influence on speculative fiction is evaluated and the Eternal Champion — Elric, Corum, Hawkmoon, Ereköse and von Bek — is assessed. Also examined are Jerry Cornelius, the spoof messiah of swinging London; the alternate worlds of Oswald Bastable; the comic fantasy of The Dancers at the End of Time; Gloriana; the crazed memoirs of Colonel Pyat; the fantastic realism of Mother London and its sequel, King of the City; and finally some of Moorcock’s later works.

The purpose of this book is to celebrate the achievements of one of literature’s leading figures. Fans should find the work a useful tool to explore the multiverse even further and those who are new to Moorcock’s work might catch a glimpse of the inspiration behind his mercurial mind. Moorcock successfully creates memorable characters and mystical landscapes using irrepressible wit and exotic language, reminding us all just how fantasy continues to be one of literature’s sharpest tools, as well as the key to developing the imagination.
***

Jeff Gardiner is a British author who was born in Jos, Nigeria, lived for many years in West London but now lives in Sussex. He also has a great passion for rock music and films. 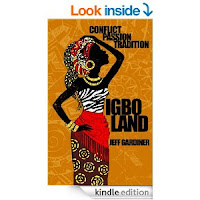 I will be featuring Jeff in another blog shortly.