I’ve had this book by Philip Kerr, his writing debut, on my bookshelf since 1990 and have only now finally read it. I must admit I’m annoyed it took me so long to discover this series. Here, he introduces private investigator Bernie Gunther – whose eleventh appearance is in The Other Side of Silence (2016). 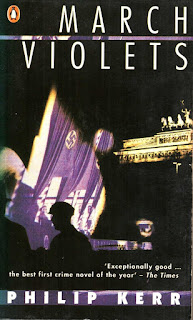 March Violets (1989) begins in Berlin, in 1936, at the time of the Olympics. The title means those late converts to National Socialism. Gunther steered clear of divorce cases but anyway had his hands full with missing person enquiries – there was no shortage of these cases in the Third Reich.


Narrated in the first person, Gunther is fully formed, a brave and stubborn German private eye of the noir pulps, complete with wisecracks and telling observation. He welcomes a change from missing persons when the Ruhr industrialist Hermann Six hires him to find the murderers of his daughter and son-in-law who also stole a priceless necklace.


Gunther’s office is in a block administered by ‘Gruber, a shifty little undertaker of a man’. Gruber is also a Gestapo informer, so Gunther tries to keep on the right side of him, which is not always easy:


‘Ah, Herr Gunther, it’s you,’ he said, coming out of his office. He edged towards me like a crab with a bad case of corns… There was something about his face that always reminded me of Max Schreck’s screen portrayal of Nosferatu, an effect that was enhanced by the rodent-like washing movements of his skeletal hands. (p26)


Uncanny, this. only a few days earlier I’d read Nosferatu, inspired by the 1922 Schreck film (see my blog http://nik-writealot.blogspot.com.es/2016/01/book-of-film-nosferatu-vampyre.html)


Kerr’s descriptions are a joy to read and seem wholly original: ‘Tesmer’s mouth was like a slash in a length of cheap curtain. And all you saw through the hole were the pints of his rodent’s teeth, and the occasional glimpse of the ragged grey-white oyster that was his tongue.’(p74).


And throughout his character’s ironic humour sustains the story: ‘Dogs are not at all keen on private investigators, and it’s an antipathy that is entirely mutual.’ (p78) Or try: ‘Looking around the room I found there were so many false eyelashes flapping at me that I was beginning to feel a draught.’ (p101)


Needless to say, Gunther is not pro-Nazi and isn’t overly fond of the Great Persuader, Adolf Hitler: ‘Everyone who was watching was getting in some arm exercise, so I hung back, pausing in a shop doorway to avoid having to join them.’ (p107).


The trail Gunther follows leads him down those mean streets so familiar to fans of private eye fiction – yet additionally laced with the mortal threat of the Nazi menace. One moment we witness Jesse Owens’ victory – ‘the tall, graceful negro accelerate down the track, making a mockery of crackpot theories of Aryan superiority’ and the next we’re in a concentration camp, with all that entails – ‘it changes a man…’


It’s an extraordinary debut novel. Kerr captures the mood of the place and the period, employing criminal slang and witty insights; the research is just right, never overdone. I’m looking forward to reading the next in the series, The Pale Criminal (1990) soon.
Posted by Nik Morton at Monday, January 11, 2016