First in the Miss Fisher Mystery series of books by Kerry Greenwood, Miss Phryne Fisher Investigates was published in 1989. Its title was Cocaine Blues (though in the US it was called Death by Misadventure). Since then, over the years Miss Fisher has gained many readers from age 17 to 90. The popularity of the books has only increased since the airing of the TV series first in 2012 – now the third series is available on DVD  – starring Essie Davis, which is perfect casting. 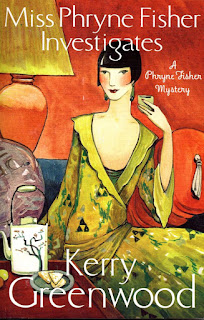 To date, Kerry Greenwood has published twenty Miss Fisher novels, the latest being Murder and Mendelssohn (2013). The short story collection A Question of Death (2008) features Miss Fisher also and has been mined for the TV series. The first episode of season one retained the Cocaine Blues title.


Although Phryne Fisher’s family was poor prior to the First World War, all male heirs to a British peerage were killed in the conflict and her father inherited the title and moved to England with the family. The book begins in 1928 with Phryne, rich and bored, solving a jewel theft and then being asked to investigate a Colonel’s daughter who is married, living in Melbourne, Australia: they fear she is being poisoned by her husband. Phryne agrees and moves to the antipodes.


We soon learn that Phryne is not your normal aristocrat. After completing school, she ran away to France and worked with a women’s ambulance unit in the war. Now, she can fly a plane, and drives her own car (a Hispano-Suiza) and is quite comfortable wearing trousers. Her personality seems to match exactly that of her 4th century BC namesake; apparently, when born her father had chosen to christen her Psyche, ‘due to a long evening at the Club the night before, when he was called upon for her name, he had rummaged through the rags of a classical education and seized upon Phryne. So instead of Psyche the nymph, she was Phryne the courtesan.’ (p16)


The story unfolds effortlessly, with light humour interspersed with a social conscience. Drug dealing – cocaine, obviously – and illegal abortion figure in this tale. Phryne is an emancipated woman, happy to love and leave men – she has no wish for commitment or children. A Russian dancer, Sasha, intrigues her while attending a soiree: ‘The guests were silenced by a painful mixture of Schoenberg and Russian folk-song, derived from musically obtuse Styrian peasants who had absorbed their atonality with their mother’s milk. The sound hurt; but it could not be ignored. Too much of it, Phryne was convinced, would curdle custard.’ (p77/78) Sasha is on a quest of his own, too, and she gets involved in more ways than one.


Her investigations inevitably bring her into the evil orbit of hoodlums: two men accost her – one, with a waxed moustache containing ‘rather more crumbs than fashion dictated…’ while the other possessed a ‘thin moustache like a smear of brown Windsor soup. Both had suggestive bulges in their pockets which told of either huge genitalia or trousered pistols. Phryne inclined to the handgun theory.’(p81)


Along the way, Phryne recruits Dot as her maid and confidante, and taxi drivers Cec and Bert as her spies and contacts. She briefly meets Detective Inspector Jack Robinson, who is blissfully unaware how Miss Fisher is going to turn his world upside down in future adventures.


An enjoyable crime caper with likeable characters and plenty of plot. As I came to the book after watching the TV series, I tend to hear the character voices from the show, which is praise to the scriptwriters who have captured the essence of the book(s).


[Puzzling why the UK publisher doesn’t use the TV series images on the covers; the publisher of the Murdoch murder mysteries had no such qualms: possibly a contractual issue.] 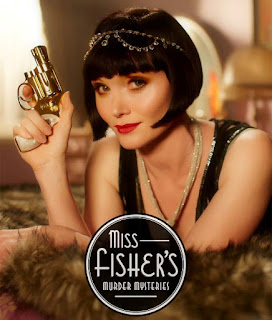