On April 15, 21 years ago, Leslie Charteris died, aged 85. He was one of the very few authors who created a character that became a household name. In my library I have a selection of his earlier Saint books, all paperbacks, collected in the 1960s. So it seems fitting today, since it’s that weekly ‘forgotten book Friday’ time again, to look at one of his books.

After some thirty years or so, it was marvellous to reacquaint myself with the Saint, Patricia Holm, Hoppy Uniatz, Peter Quentin, Orace and Inspector Claud Eustace Teal. While I enjoyed Charteris’s later and shorter moral tales, I much prefer the older stories. Printed in 1937, this was the 17th book in the series and has a surprisingly grim edge to it that is lacking in the modern versions translated to TV.


The three novellas are told in Charteris’s inimitable omniscient narrator’s voice, often with his tongue in his cheek. He had a highly amusing turn of phrase: ‘They studied him with the detached curiosity of surgeons inspecting a new kind of tumour revealed by an operation.’


Charteris was also a keen observer and used language to good effect and because of this he’s a pleasure to read. Take, for example, a paragraph from Chapter 8: ‘The boisterous human fellowship of the Broken Sword was swallowed up in an abyss as he closed the door of the public bar behind him. As if he had been suddenly transported a thousand miles instead of merely over the breadth of a threshold, he passed into a different world as he faced the quiet road outside – a world where strange and horrible things happened such as the men he had left behind him to their beer would never believe, a world where a man’s life hung on the flicker of an eyelid and the splitting of a second, and where there was adventure of a keen corrosive kind such as the simple heroes of mythology had never lived to see. The Saint’s eyes swept left and right before he stepped out of the shadow of the porch, but he saw nothing instantly threatening…’ Great stuff!


and
The man behind the stickman


The entire canon (bar the first book) have been republished; please refer to this website for more details... 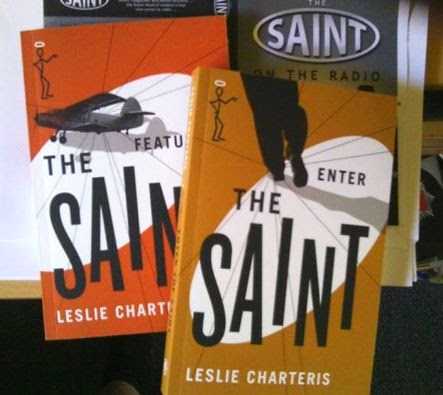