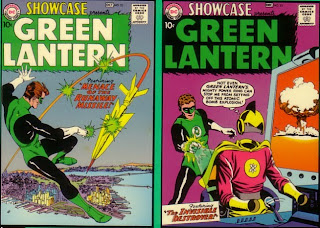 November 5, 1959. I was eleven and my mother said I could have some money to spend on fireworks for Bonfire Night. Mr Andrews, the newsagent, sold fireworks as well as periodicals, stationery and books. I gave it some thought and convinced her the money allocated would be better spent on a handful of comics. ‘All right, make your selection,’ she told me, and stipulated the amount I could spend.

I was spoilt for choice from the rack. I’d never read or bought any of the super-hero comics available, though I’d seen them in the rack. I’d encountered black and white reprints of Pecos Bill – one episode gave me nightmares, apparently; the monochrome Roy Rogers comic was a regular too, but hitherto I bought and read British comics – Eagle, Express, Lion, Hotspur, Tarzan adventures, Comet and so on. Full colour on every page was a new experience.

My handful consisted of Strange Adventures, Mystery in Space, My Greatest Adventure, World’s Finest, Brave and the Bold, Showcase and Our Army At War.

And that night I got to see rockets blazing in the sky from other people’s back gardens, too. Win-win.

So began a long – and doubtless costly – fascination with American comics. I had a number of favourites, inevitably. One of these was Green Lantern. The covers by Gil Kane were great. I was introduced to the silver age version, (not appreciating there’d been a golden age GL!), this one created by John Broome, in Showcase 22 – ‘Menace of the Runaway Missile’, Sep/Oct 1959. GL’s Showcase outing was obviously popular, because he subsequently featured in his own bi-monthly title. Odd, that #1 didn't have No.1 on the cover, though...

Over the years, I avidly collected as many titles from the DC universe as I could afford – and find. GL#5 proved elusive: I found one copy, but couldn’t buy it at the time as I needed that money for a Scouting event. Many years later, I read a reprint version. 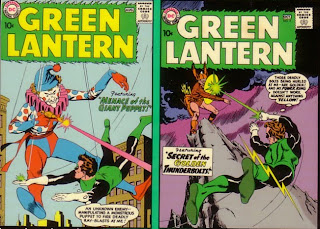 In the 1970s, I sold quite a number of comics from my collection, including GL#1 for the sum of 8GBP, which was quite a lot then, since it cost me that to purchase a replacement car tyre after a puncture on the same day!

Now, at long last, the Emerald Gladiator is going to feature in a movie. The teasing trailer for next summer’s release suggests they might even do him justice.
Posted by Nik Morton at Saturday, December 18, 2010

Green Lantern has always been a favorite of mine. I still have a stack of those from the 1960s packed away in a comic box. A nice post that brought back many fond memories!

Thanks, Tom. I'm quite happy with my DC Archives hardback to rekindle memories of simpler storytelling times.

We are just the same age and I loved Green Lantern at age 11. If only I had hung on to those comic books.

Green Lantern was always a favorite as a young boy. Much more so than Superman or Batman back then. Mostly a Marvel fan, Lantern was one of the few DCs I checked out regularly.

Patti - I still have the Our Army at War and Mystery in Space issues!

Randy - I was a DC fan, but latched onto X-Men from #1 - but sadly didn't keep that issue!