From time to time, I’ll offer a few (possibly pedantic) comments on what tends to grate slightly when reading novels or works in progress. 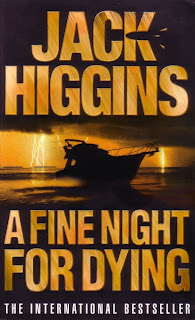 ‘Rossiter and Jacaud sat at a table… a bottle of cognac between them. Otherwise the place was empty, except for Mercier, who stood behind the bar counter polishing glasses.’ – A fine night for dying, Jack Higgins (1969).

Otherwise the place was empty, except for… Why not simply write: the only other person was Mercier…?

I’ve seen this example time and again, ‘empty, except for…’ The place wasn’t empty, since there were at least two other people in there. What constitutes full? When is it half-empty? This phrasing is often used by new writers who haven’t mastered critical self-edit yet.

I just happened to read this book yesterday so there’s no intention of slighting fellow Geordie-born Jack Higgins – a writer who has published over 60 novels and sold 250 million books and doubtless given pleasure to even more. Some years ago, a Sunday supplement journalist castigated him for unoriginality and regurgitating much of his material – whether gun lore, dialogue, events or even characters. Probably written by a disgruntled author who hadn’t achieved Higgins’s success. When you’ve written so many books, it’s quite possible some repetition creeps in. For example, Tarzan kept tripping over lost cities and civilizations in Africa, so that it seemed that the continent was overpopulated with them, but that didn’t detract from reader enjoyment.

It’s a strange coincidence but in the above book, Higgins writes: ‘Rossiter’s… hand dipped into his pocket and emerged clutching the Madonna. There was a sharp click and the blade jumped into view.’ And in Bad Company(2003), which is advertised at the rear of this book, there’s the passage: ‘(Marco) keeps an ivory Madonna in his pocket. When you press the button, the blade jumps out and shears right up under the chin.’ But, so what?

The majority of his early books are competent thrillers, though these days it’s unlikely they’d get published. And maybe that’s a fault of the present system; Higgins wrote 35 books before his breakthrough The Eagle Has Landed. Few, if any, publishers would now consider nurturing talent for that period of time. Yet he tells good fast-paced stories, is prolific – and popular. Go figure.
Posted by Nik Morton at Sunday, December 19, 2010

Higgins novels, especially early to middle Higgins novels, are among my favorites. He can repeat himself ll he wants as far as I'm concerned. In fact, I wish he'd quite with this new terrorist heavy stuff and repeat his early thriller formula . . .

I agree, Paul. He gave/gives the readers what they obviously want, hence his long-term success.