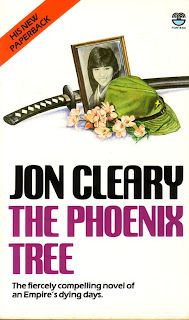 This was published in 1984. Cleary was a successful Australian author, his most famous book being The Sundowners, which is excellent. According to the blurb, seven of his books have been filmed, no mean achievement. And his Peter’s Pence was awarded the Edgar Allen Poe prize for the best crime novel of 1974. Despite the crime novel award, he wasn’t pigeonholed as a genre writer: he was a novelist and could write about anything. Not so easy, these days – publishers look for ‘brands’…

In the closing days of the Second World War, two friends, Kenji Minato and Tom Okada – the blurb mistakenly calls him Akada! – are working for the US Navy and become undercover agents in Japan, intent on identifying the members of the secret Peace Faction. Tom’s contact is Natasha Cairns, the widow of an English agent and radio-operator. They fall in love, but are constantly at risk from exposure, the Allied bombing raids and the kampei, the Japanese military police. An added complication is the unexpected appearance of Natasha’s concubine mother, a marvelous creation.

The Phoenix Tree is mainly written in the omniscient POV, and suffers from that by frequently jumping from one character’s thoughts to another’s in the same scene. It’s doubtful if the novel would find a publisher these days, judging by the masses of advice out there concerning POV etc. Yet the scope of the novel demands this approach, because Cleary is not only writing about individuals, he’s conveying the massive and horrendous cataclysm of the two A-bombs, which, naturally, could not be related from a single character’s viewpoint.

Cleary depicts the subtleties of Japanese customs and sense of honor and has a good novelist’s turn of phrase: ‘The trees and shrubs were loaded with the slow green bullets of spring; but there was still the dead perfume of ash in the air.’ There’s also humor: ‘She was an ideal wife for a general; she would have driven a pacifist off to war.’

A love story and a page-turning novel about spies and the dying days of an empire.
Posted by Nik Morton at Thursday, December 09, 2010

Great to see you in the Forgotten Books lineup, Nik. I'm a sucker for any book with a Samurai sword on the cover.

Hi, Evan. Maybe one of Chuck Tyrel's next westerns will feature a samurai sword...? I used to have one -Samurai sword... till my parents gave it away...