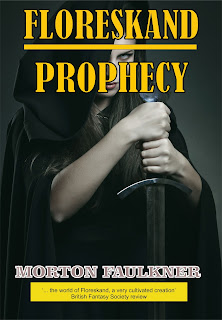 As the events in Madurava unfold, Lornwater’s Madurava House undergoes a significant alteration in the alignment of its spirit statues, signifying the prophet is coming! Though it is not clear from which direction…

If there is any truth in the prophecy, then many of the city kingdoms of Floreskand will be shaken to their core.

Barely recovered from his ordeal in King, Aurelan Crossis sets out on a journey of vengeance against Saurosen, the deposed king, which takes him into the midst of pilgrims heading for the Sacred Hills, where he will be sorely tested.

Bindar, a survivor of the strife in Wings, now trains mountain troops in Arion. In the Vale of Belet he comes into contact with the Haram Sect as well as a powerful fugitive from his past.

The emperor of Tarakanda is faced with heightened political and religious tensions and insoluble assassinations that threaten to destabilise the empire.

And Lornwater is still recovering from the civil strife, where factions of Remainers continue to threaten the life of the rightful king. Watchman Welde Dep finds his investigations bring him closer to Queen Tantian, risking the jealousy and enmity of the king.

The saga of Floreskand continues…

Absolutely riveting just like the other 3 books. I cannot wait for number five.

I was surprised by a couple of unexpected deaths. The authors obviously have taken a lead from George R. R. Martin! …

I found the links with earlier books grounded me and wholly satisfying!

…There are a few neat touches here, I reckoned. I liked the nod to Chaucer’s Canterbury Tales with the various pilgrims. The relationship between Welde Dep and Queen Tantian suddenly seems fraught if the unstable king ever discovers it! There’s more to Dep than we have been told, I suspect, too.

… Good to see Bindar return from the first novel. I quite liked him.