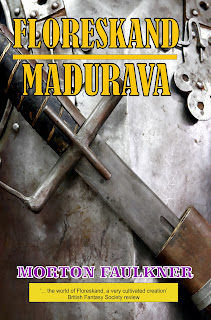 Shortly after the Lornwater rebellion (Floreskand 2: King), the head of the Madurava House witnesses a meaningful change in the alignment of the sacred compass – pointing to the Sonalume Mountains, to the dunsaron. 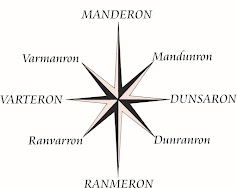 Meanwhile, the Ratava are preparing for a migration that will take them to the dunsaron, for their food-source – the vast numbers of the schwarm – are burrowing away from their usual haunts towards the land of their forebears to propagate the species.

We meet again Rujon Sos and K-Kwan as they track the schwarm and the various competing groups of Underpeople.

Still recovering, the three cities of Lornwater need rebuilding and that requires money. But the royal treasury has been emptied by deposed Saurosen. The trail of lost riches leads Lord Tanellor to the dunsaron, guided by the daughter of Arqitor, Charja Nev.

Others are converging on the same area. First-commander Nimentan Pellas, loyal to the deposed king, has been sent on a secret mission with a large body of soldiers. Almaturge Rait Falo is headed there also with a caravan of great wealth.

Ulran is slowly coming to terms with his new disability, while his son Ranell is in pursuit of Epal Danorr who has been released by a general amnesty and has abducted Lorar.

Watchman Welde Dep is embroiled in arcane investigations that point to a powerful almaturge committing murder, while the new king wrestles with the serpentine diplomacy of the Ranmeron Empire, Tarakanda.

The denouement will be played out in a mysterious place where the land has never experienced snow and is always warm. Soon, it will be warm with flowing blood…

The most enjoyable of the series so far, Madurava takes you deeper into the lives of the various groups of characters in an enthralling plot which is so vividly described you begin to feel you've just watched the movie. Certainly, by the end of the book you just know that there must be an awful lot more to tell and I look forward to the next one with great anticipation.

The third book in the series and the best so far. The saga continues to grow following the aftermath of the civil war. Old favourites reappear on a new adventure with all groups heading in the same direction hinting at a grand climax that doesn't disappoint. As always with these stories there is an unexpected twist... The book ends hinting at an even more epic adventure to come in book 4 Prophecy. If this series continues to develop in the way it has so far I think it is going to rival Eddings and Feist.

Love how the characters are developing. The storyline is becoming more intriguing and you get a sense of being very much a part of the adventure. The complexity of every aspect of this land, from the calendar to the religions, shows the author’s dedication to ensuring that the tale is unique and fresh.