Five years before Ruth Rendell’s tour-de-force A Sight for Sore Eyes (reviewed here on 29 March), she tackled a similar theme in The Crocodile Bird: here, young Liza is being protected from the modern world, being home-schooled and not seeing any television; in Eyes, it was Francine who was overly protected because of a traumatic event in her early childhood, when she witnessed her mother’s murder. In both cases, Rendell examines how the isolation of the young women affects them, yet that’s where the similarity ends. Both works are highly original and powerfully related. 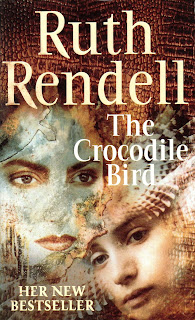 Liza’s mother Eve tells her she must leave their remote country gatehouse, because the police will be coming next day to arrest Eve. For Eve’s protection, Liza must not be found here. It’s a worrying situation, for in all of her seventeen years of life Liza has never been on a bus or a train, had never played with another child her own age, and had never left the extensive grounds of the Shrove mansion; the mansion’s gatehouse was their home. Liza had almost no knowledge of the outside world.

There is one glimmer of light for Liza. She is not entirely alone. Without her mother’s knowledge, she had begun a love affair with Sean, a young man who worked on the Shrove estate.

So begins three months of life with Sean in his caravan, while she learns about the real world. And as they cohabit she pieces together segments of the past involving her mother, her mother’s lovers and the violent death she had witnessed. And finally she learns why her mother wanted to protect her from the outside world…

As ever, Rendell imbues the story with extensive detail to create a sense of realism. The unravelling of the past is cleverly done, subtly building a sense of dread as the ending approaches.

And what of the intriguing title?  During one of her lessons Liza’s mother refers to a Trochilus, a kind of humming bird. Its ‘other name was the Crocodile Bird, so-called because it is the only creature that can enter with impunity the mouth of a crocodile and pick its teeth. It also cries out to warn the crocodile of an impending foe.’ (p190).  And while Eve might have killed a man or three, Liza realised she was never at risk: ‘I was like the bird that lived inside the crocodile’s mouth, I was safe whoever else wasn’t.’ (p243).