Bernard Cornwell’s historical novel was published in 2008 and uses the French spelling for the famous battle as it avoids any confusion with the many non-fiction books on the same subject. 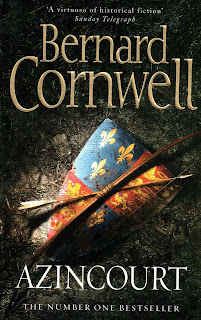 The book concerns Nicholas Hook, a young man of nineteen, a forester tasked with providing venison for the local lord by using his trusty longbow. While the book is ultimately about the conflict at Agincourt, it is also about family conflict. For two generations the Hook family had been feuding with the Perrills. An altercation with the Perrills makes Hook an outlaw, so he flees to France as part of the English contingent hired by the Duke of Burgundy. Stationed in the town of Soissons, he is comfortable – until the French attack. The town is betrayed and Hook has to fight for his life, using his skill with the bow to evade capture. While he is escaping, he saves the virtue and life of a nun about to be ravaged. The nun is called Melisande and stays with him. Before they get away they witness the outrageous slaughter of the English bowmen and others.

They make it back to England via Calais, but it is not long before Hook is recruited to join the troops of Henry V as he leads an invasion force against France. They land without incident and lay siege to Harfleur. But the siege seems to go on too long, and the English become debilitated by disease…

At considerable cost to men, Harfleur is taken. Against all advice, Henry V plans to move through France towards Calais, expecting, hoping for a battle.

And of course he gets one.

The sack of Soissons, the siege of Harfleur, the trek to Agincourt and that battle are all described in riveting detail, unsparingly gory.  There is no glory in war. War is hell, and it is depicted as such here. Yet there is humour, too:

Sir John ordered them to stick to their positions before the battle. Even if their bowels were loose. ‘You’re to shit where you stand. Shit and die! And go to hell with fouled breeches.’ A moment later, Sir John scowled at Hook. ‘Jesus, man, can’t you do that upwind of me?’ (p360)

Sir John is a larger-than-life character, as is the priest who travels with Hook, Father Christopher. Melisande is the bastard daughter of a French nobleman, which complicates matters for Hook. The Perrills are also in the fighting force and pose a serious threat, notwithstanding the thousands of French men-at-arms ahead of them.

Cornwell has the splendid knack of bringing alive the battle scenes while simultaneously ratcheting up concern for the main protagonists, for Melisande is among the camp-followers.

In addition, there are additional layers of superstition, unquestioning belief in God, who is according to Henry V on their side, and unbridled lust and hatred.

I’m just sorry it has taken me so long to get round to reading this superb novel.

There are appropriate maps, and a ‘Behind the Battle’ section which includes a historical note, a brief treatise on the longbow, and an interview with Cornwell.