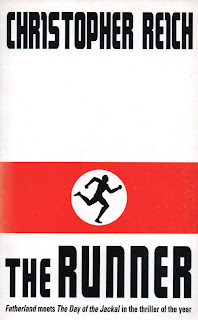 Christopher Reich’s period thriller has the strapline ‘Fatherland meets The Day of the Jackal in the thriller of the year.’ For a change, the publicity isn’t an exaggeration. It’s only taken me 21 years to get round to reading this one, just sitting on the shelf waiting; it was published in 2000.

It’s July 1945 and the war is over. Erich Seyss, who had been an accomplished runner in the 1936 Olympics is a captured SS officer in a POW camp awaiting trial by the War Crimes Commission – until he boldly escapes.

Devlin Judge, a lawyer with the International Military Tribunal learns of the escape shortly after finding out that Seyss was responsible for his brother Francis’s murder along with other American soldiers, all massacred in cold blood at Malmedy. Judge requests seven days’ leave to hunt down Seyss.

On a couple of occasions he comes close to catching his man, but the ex-SS officer is too quick, too fleet of foot to be trapped. During the hunt, Judge suspects that there is a conspiracy at the heart of the American military hierarchy that could pitch Europe into another deadly conflict. Of relevance to the allusion of The Day of the Jackal is the Potsdam Conference which was held in Potsdam, Germany, from July 17 to August 2, 1945. The participants were the Soviet Union, the United Kingdom, and the United States, represented respectively by Premier Joseph Stalin, Prime Ministers Winston Churchill and Clement Attlee, and President Harry S. Truman…

One of Judge’s contacts happens to be Ingrid, one-time lover and jilted fiancé of Seyss. She too gets sucked into the gripping quest in which it is sometimes difficult to determine friend from foe.

Reich tells his tale with masses of period detail, plenty of action, in an authoritative style that makes the story believable. The descriptions of a bomb-blasted Berlin and the scrabbling survivors living from hand-to-mouth put the reader there. There is some clever blending of fact with lashings of fiction. He has a good turn of phrase, too: ‘She smiled, and the smile was like the first crack in a pane of glass. She could feel the fissure splintering inside of her, its veins shooting off in every direction. It was only a matter of time until she shattered.’ (p456)

The publisher of the paperback (Hodder Headline) excelled here, not only showing the runner on the front cover resembling the swastika, but also having inserted at the bottom of each page the silhouette of a runner in different poses; if you flick the pages from the beginning of the book to the end, you will see the silhouetted figure running from left to right. (see below) Neat. 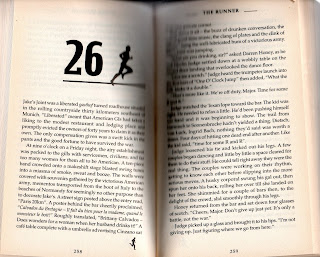