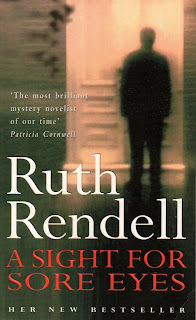 Ruth Rendell’s 1998 book A Sight for Sore Eyes is an exquisitely plotted crime novel. At just over 400 pages, it is longer than many of her books, but it’s still a fast read, because the reader is impelled to keep turning the pages to find out what happens next.

Like many of her novels, the troubles her protagonists face are brought home to them by events in the past, and this one is no exception.

The Grex brothers – Keith and Jimmy – lived in the family home; then Jimmy married Eileen. They were not imaginative individuals, and there’s plenty of dark humour describing their relationship: ‘in order to be productive ejaculation had to be frequent, lavish and cumulative… a lot of that stuff had to get inside you before anything resulted… like the Grecian 2000 lotion Keith put on his greying hair, which only took effect after repeated applications.’ (p9) The result was an unexpected baby boy, Teddy.

Teddy grew into a handsome youth, but lacked any parental affection and was left to his own devices so that emotionally he was sadly deficient of empathy.

Yet Teddy has one abiding interest: he likes beautiful things, which is fostered by the neighbour, Mr Chance, who is a craftsman in wood and is fond of the phrase ‘A sight for sore eyes.’ (p17, p240)

Rendell’s descriptions are poignant, astute and sometimes amusing. ‘There was something about Keith that suggested a half-melted candle. Or a waxwork left out in the sun. The flesh of his face hung in wattles and dewlaps. It seemed to have waddled down his neck and sagged from his shoulders and chest to settle in stacked masses on his stomach.’ (p21)

The living conditions in the Grex household were decidedly deplorable in Teddy’s eyes, and he was ashamed. ‘Woodworm were devouring the living-room furniture and from the television table had bored into the skirting board… Spiders were in the bath and silverfish wriggled across the floors.’ (p57) ‘The tracks made by moth grubs already showed on the lumpy woollen surfaces and moth cocoons, greyish-white like mildew, nestled between the stitches.’ (p58)  ‘The fly-spotted mirror was losing its silvering in a kind of greenish ulceration round the edges…’ (p59)

Little girl Francine Hill was in her bedroom when her mother was murdered downstairs. She hid in case the murderer was after her as well. And when her father found her she was so traumatised she had lost her power of speech. She became a patient of Julia, a psychologist who eventually married Francine’s father. Francine was finally restored and she grew up cossetted by Julia, as if wrapped in cotton wool, fearful lest the murderer came back…

Francine becomes a beautiful young woman, someone who could easily be idolised by the likes of Teddy.

Inevitably, these characters will interact, their lives dovetailing, and slowly but surely there will be a fateful reckoning.

Rendell’s psychological insights, the depiction of a character’s gradual slide into insanity, her masterful plotting and the grim denouement make this novel a totally satisfying experience.