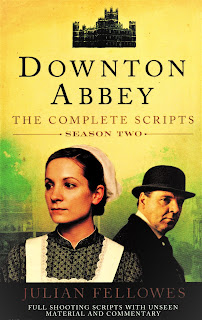 This book follows the same format as the first season scripts, offering asides and insights from the author Julian Fellowes, plus text that had to be cut for various reasons, usually overrunning time.

These pages are very useful for budding writers of fiction, students of film, and  the many fans of the TV series itself. This series, then, as Fellowes states in his Foreword, ‘sees our characters face the ultimate test of war. Some are strengthened by the ordeal, a couple are defeated, but all of them are changed.’

In one of the footnotes Fellowes reveals that he borrows ‘my friends’ names relentlessly.’  The intended of Matthew is Lavinia Swire, for example. He used a Northamptonshire friend’s name Lavinia in her memory. The surname Swire is filched from his friend Hugo, MP, whose wife recently gained notoriety from her memoires!

So many of the footnotes hark to Fellowes’s memories of family and friends, for example his great-aunt Isie commented at the end of the war ‘Sometimes it feels as if all the men I ever danced with are dead.’ A poignant vignette (p21).

On reading the scripts it is evident that all of the actors involved add richness and depth to Fellowes’s script. And he is unstinting in praise in several footnotes. And it’s not only the main actors, either. ‘The hall boys and those maids who have no lines take their contribution very seriously and we are lucky that they do. In fact they do a superb job. These parts may not have much in the way of lines, but they are very important to the show.’ (p452) In one case he was sorry that a hall boy’s line had to be cut.

As mentioned in my review of Season One’s scripts, the footnotes also cover historical and sociological issues, all of them of interest. An aside regarding the use of the Marcel waver, regarding long hair being ‘a sign of bondage’ – a statement of femininity but also impracticality: ‘in the Forties so many women were imitating Veronica Lake’s hairstyle and their hair was getting caught up in machines. So ‘she cut off her long seductive locks and with them, I’m afraid, her career.’  (p144)

There’s an amusing aside about working with dogs and children. Not because they will steal the scene. The actor has to be perfect in each take, in the hope that in one of them the dog or child will perform correctly, and only that take will be used. (p163) Another instance is that it is ‘bred into an actor’s bones that when some potential employer asks you if you can do something, you must always say yes and then go off and try to learn to do it…’ (p239)

What is also fascinating is how Fellowes views his characters, ascribing motivation: ‘I don’t blame Mary for failing to see that straight away.’ (p207)

There are a great number of sad scenes, and again some are inspired by the tales from Fellowes’s relatives. One poignant story is about a female relative being coerced into a marriage with a shell-shocked survivor, doing the honourable thing,, and in effect tragically wasting her life. (p285)

When writing about the Titanic incident (which actually started the first season), Fellowes is critical of the trendy modern perspective of viewing the past through the distorted prism of today’s sensitivities: saying of the people on the ‘unsinkable ship’, ‘they were so unbelievably brave. The modern historian is usually a miserabilist and is only happy when reporting how badly everyone behaved, but if he tries this with the Titanic he will be disappointed. I’m not saying nobody behaved badly, but very few did. And in all three classes there were so many examples of staggering courage.’ (p329)

Inevitably, Fellowes regrets some cuts that had to be made. Yet, to be fair, which he always is, he can also appreciate that in many cases they were valid: ‘I think I was wrong and they were right.’ (p359)

The Spanish ‘flu epidemic of 1918-19 tragically figures in the storyline. Bearing in mind this was written in 2012/2013, Fellowes says: that epidemic is ‘almost forgotten today.’ (p435) How times change; since Covid-19 was unleashed from China in 2019 there have been dozens of articles and TV programmes about its more serious precursor!

What shines through these scripts is the author’s empathy for all the characters. Sometimes people are petty, but then they surprise with an act of kindness; others are generous with their time; while some rail against change but have to face its inevitability. And virtually all of these character drawings are conveyed through dialogue (enlivened by flesh and blood actors).  These scripts are a masterclass in drama – and history, in fact.

Again, there are stills from this season (in black and white) and cast and production lists.