Book of the film - LAST STAND AT SABER RIVER 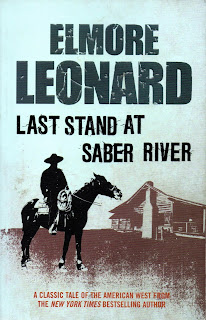 Written by Elmore Leonard in 1959, my copy is published 2005. Leonard is famous for both his crime novels (Get Shorty, Mr Majestyk, Glitz, and Out of Sight) and also westerns (3:10 to Yuma, Hombre, Valdez is Coming, Joes Kidd, and The Bounty Hunters) and many of his books have been filmed.

The film and the book differ mainly in the beginning and end sequences.

The film starts earlier than the book, filling in background that is flashbacked in the book. The Civil War still rages. Reported killed in action, Paul Cable is a Confederate veteran returning home to surprise his wife Martha and two children (they lost a third to disease while he was away fighting; though in the book the child is alive [economising on young actors]). His family has been staying with her parents but now he is going to take them to their homestead in Arizona, which they left during his absence. However, in the book it begins with them arriving at the trading post which is near to their homestead. But the owner has passed away and it is now part owned by Janroe who lost a hand in the war.

Cable soon learns that a Union-sympathising family has assumed control of Cable’s homestead and land. This is the Kidston family: Vern, his brother Duane and his daughter Lorraine. Some of the Kidston cowhands are staying at the homestead. Cable chases them off. Thus begins an ongoing feud between the two families. In the book Cable suffers two brutal beatings at the hands of the Kidston crew and Duane (the film doesn’t impose this on Selleck, he is tougher and not averse to killing in self defence).

Janroe harbours a powerful hate for the Union and all who supported the North. He is intent on engineering further conflict between the two families, even while both Vern and Lorraine are about to talk rather than fight with Cable and Martha.

It is all brought to a head in the final pages and is taut and tense, as one is accustomed when reading any Elmore Leonard book.

However, the film moves beyond the book, stretching out the suspense, determined on inserting more action and conflict.

Both endings work for their different media.

If you like the actor Tom Selleck, then you should enjoy this film. If you like a novel with conflict, strong characterisation and a moral core, then you’ll enjoy the book.