Anthony Powell’s eighth book in his sequence is The Soldier’s Art and was published in 1968. 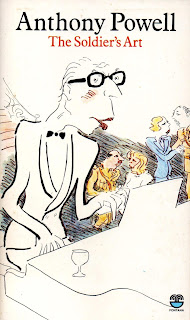 It begins in 1941 with our narrator Nick Jenkins buying an army greatcoat in the neighbourhood of Shaftesbury Avenue, ‘where, as well as officers’ kit and outfits for sport, they hire or sell theatrical costume’. (p5) As ever, Powell provides an excellent scene setting for a humorous interlude where the tailor’s assistant, ‘bent, elderly, bearded, with the congruous demeanour of a Levantine trader’ is convinced he has seen Nick acting on stage, and can’t be swayed from this, ending with ‘I’ll wish you a good run.’ (p7)

England is in the midst of the blitz. ‘Announced by the melancholy dirge of sirens, like ritual wailings at barbarous obsequies, the German planes used to arrive shortly before midnight…’ (p9) and these air-raids are significant, notably towards the end of the book. The targeted populace could only hope and pray the raids were not too long – ‘… the hope that the Luftwaffe, bearing in mind the duration of their return journey, would not protract with too much Teutonic conscientiousness the night’s activities.’ (p10).

Besides pricking the pomposity of individuals, Powell puts in his sights the Treasury: ‘… the cluster of highly educated apes ultimately in charge of such matters at the Treasury.’ (p20)

Again, we’re introduced to several new characters. Cocksidge: ‘… the imaginative lengths to which he would carry obsequiousness to superiors displayed something of genius. He took a keen delight in running errands for anyone a couple of ranks above himself, his subservience even to majors showing the essence of humility.’ (p39) Soper, the Division Catering Officer, who stared at a piece of rejected meat on Biggs’s plate: ‘… to implyu censure of too free and easy table manners, or, in official capacity as DCO, professionally assessing the nutritive value of that particular cube of fat – and its waste – in wartime.’ (p71)

And we meet people from the earlier books, too. Nick is working for Widmerpool now, who has not improved in his manner: ‘We are not in the army to have fun, Nicholas.’ (p72)

Then there’s Chips Lovell who meets up with Nick: ‘I hope there’ll be something to drink tonight. The wine outlook becomes increasingly desperate since France went.’ (p115) How will we ever cope after Brexit…?

Another person from earlier is Mrs Maclintick, who is now sharing a house with Moreland; ‘What lax morals people have these days,’ Moreland says (p216). ‘Small, wiry, aggressive, she looked as ready as ever for a row, her bright black eyes and unsmiling countenance confronting a world from which perpetual hostility was not merely potential, but presumptive.’ (p118)

Charles Stringham turns up in the army, too, having become tea-total, and is quite happy to be an ‘other rank’, the officers’ mess waiter. He makes a telling statement, too: ‘How severe you always are to human weakness, Nick.’

Some characters we’ve known die – victims of the war. The scenes where Nick appears at the aftermath of a bombing are touching though Powell inevitably steers clear of sentimentality and any emotion.

Throughout, and as evinced by the above examples, Powell has a good turn of phrase. ‘I began to tell my story. He cut me short at once, seeming already aware what was coming, another tribute to the General’s powers of transmuting thought into action.’ (p89) And ‘The comparative enthusiasm Farebrother managed to infuse into this comment was something of a masterpiece in the exercise of dissimulation.’ (p194)

We’re barely aware of what is happening in the war, apart from an occasional line such as ‘military action in Syria’ and ‘the Germans attacked in Crete’ (p168) And Germany invades Russia (p219) bringing some kind of hope…

Eight books down, four to go. We, the reader, shall soldier on!

Next: 9 – The Military Philosophers.