Seventh in the sequence of twelve books that comprise A Dance to the Music of Time by Anthony Powell is titled The Valley of Bones (1964). 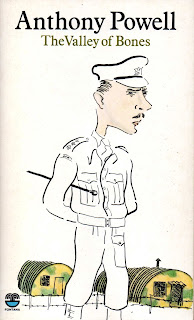 Narrated by Nick Jenkins, we find him in the army now. It’s 1940 and he’s a second lieutenant stationed in a Welsh regiment officered in the main by bank employees and manned by miners.

The title of the book comes from Ezekiel, the passage being quoted at a religious service held in one of the parish churches of the town near the army base: ‘The hand of the Lord was upon me, and carried me out in the spirit of the Lord, and set me down in the midst of the valley which was full of bones, and caused me to pass them round about: and, behold, there were very many in the open valley: and, lo, they were very dry…’ (p42) As is the narration here…

The battalion under the command of Captain Gwatkin is moved to Northern Ireland. Gwatkin is a sympathetic but muddled character who strives to endear himself to the men, striving to get the best out of them, even the most recalcitrant: ‘The NCOs and privates do their best. Are you going to be the only one, Sayce, who is not doing his best?’ Farce rears its head when Gwatkin muddles instructions during an exercise. As a result, there’s a snap inspection, an unexpected visit to the Battalion by General Liddament, who voices concern when he learns the men haven’t had porridge. He cannot believe that anyone can dislike porridge; they must be foolish fellows. (p102)

There are an amusing couple of pages poking fun at Lord Haw-Haw’s propaganda and his ridiculous pronunciation. (pp58/59)

As in earlier volumes, Powell can visualise a scene well: ‘Within the (train) carriage cold fug stiflingly prevailed, dimmed bulbs, just luminous, like phosphorescent molluscs in the eddying backwaters of an aquarium, hovering above photographic views of Blackpool and Morecambe Bay: one of those interiors endemic to wartime.’ (p110)

Nick reflects on his past, evoked for example by meeting Brent, a paramour of Jean, an earlier love. ‘… even when you have ceased to love someone, that does not necessarily bring an indifference to a past shared together. Besides, though love may die, vanity lives on timelessly.’ (p135)

Though written in the 1960s, the story is in the 1940s, and we’re reminded how the cost of living has altered: ‘I’ve got a broken-down old car I bought with the proceeds of my writing activities. It cost a tenner…’ (p142) Oh, to afford a car on one’s writing proceeds these days!

The characters are interesting, whether it’s Gwatkin, the unrequited lover, the alcoholic Lieutenant Bithel, CSM Cadwallader, Odo Stevens or Priscilla. Indeed, the least interesting is the narrator himself, Nick.

Yet again, Powell – in the guise of Nick – cannot deal with emotion. ‘It is hard to describe your wife.’ (p143) And ‘… when I had been able to see Isobel and the child. She and the baby, a boy, were “doing well”, but there had been difficulty in visiting them…’ (p178) He’s talking about his own boy who remains nameless! No affection whatever… And it is not mitigated by the words ‘Like a million others, I missed my wife…’ (p180)

Reality impinges but briefly: The summer was very hot. ‘The Germans had invaded the Netherlands, Churchill become Prime Minister…’ (p188) And by the book’s close: the ‘German army were reported as occupying the outskirts of Paris.’

Towards the end of the book, Nick is transferred to be the assistant of the HQ Division’s DAAG (Deputy Assistant Adjutant General) and is surprised by the incumbent’s identity…

Editorial comment
Editors can miss things, I know from experience. Here’s one case in point. ‘Rowlands thinks it will be Egypt or India. Rowland always has these big ideas.’ (p19) Somehow, Rowland has gained an ‘s’…!

‘Dooley patricularly entering into the idea of a rag.’ (p29) A typo that slipped through; this shouldn’t happen nowadays with spell-checker.

‘Rain had begun to fall again.’ (p86) Rain always falls. Maybe, ‘It began to rain again’ would have worked?

Labels: #books, #editing, #writing, A Dance to the Music of Time, Anthony Powell, The Valley of Bones