While recently visiting the north-east of England, Jen and I were taken by our friends to Woodhorn Museum near Ashington, Northumberland. Much of it is an outdoor museum on the site of the old colliery.


Last year, some five million people visited the poppy memorial to the fallen at the Tower of London – Blood Swept Lands and Seas of Red, involving a vast field of ceramic poppies, each one planted by a volunteer in memory of the life of a British and Colonial soldier lost during the First World War.


While the original installation was designed to be transitory, many of the poppies have been preserved for posterity for subsequent sculpture effects. They have been split into two sculpture offerings by artist Paul Cummins and designer Tom Piper: Weeping Window is a cascade of several thousand handmade ceramic poppies seen pouring from a high structure to the ground; Wave is a sweeping arch of bright red poppy heads suspended on towering stalks; both will appear at venues around the country until being handed over to the Imperial War Museums in 2018.. 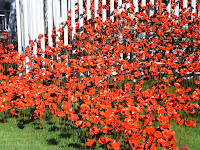 Woodhorn Weeping Window
Woodhorn Museum is the first venue to present Weeping Window, which cascades 55ft from the winding wheel of the No.1 Heapstead (built in 1897). This remarkable sculpture is truly photogenic (viewable here from 12 September to 1 November 2015). 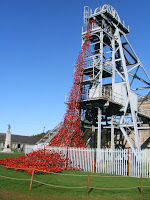 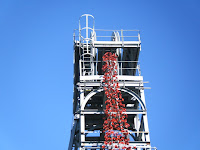 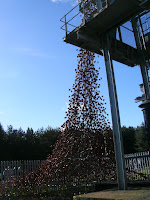 The colliery played a major part in the war effort, not only for coal production but also supplying skilled miners for the front; some 2,500 miners from the workforce of 9,000 served within the armed forces and by the beginning of 1917 about 250 had lost their lives.


The Weeping Window at Woodhorn serves not only to embody remembrance of those lives lost in the conflict but also those who died in the mines.


The Weeping Window has since moved on to a new venue, Liverpool’s St George’s Hall (from 7 November until 17 January 2016); however, if you are in the Ashington area, Woodhorn museum is definitely worth a visit, providing a fascinating and often moving glimpse into the lives of the miners and their families, remembering their hardship and community spirit.


There is a shop that sells a great assortment of items, from histories to fridge magnets; a cafeteria – ‘the cutter’ – sells locally produced food, from cooked meals to fine cakes and pastries. 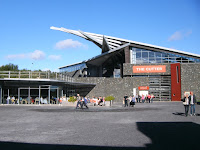 A coal mine – with its iconic towering winding wheel – figures in my e-book The Prague Papers, set primarily in Czechoslovakia in 1975.