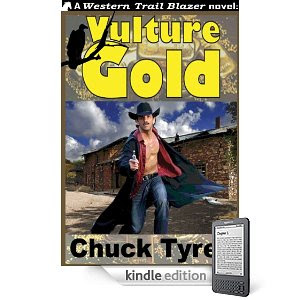 This was Chuck Tyrell’s debut novel, and he hit the ground running. In fact, his main character embarked on the run of death against fourteen Jicarilla Apache warriors. But I’m getting ahead of myself.

The story begins with a gold heist – desperadoes stealing from the Vulture Mine bullion room gold bars totalling $100,000. Vulture City’s town marshal is Cherokee half-breed Garet Havelock, nicknamed Iron Knee because he his kneecap was shot off by his nemesis, Barnabas Donovan some years back. He may have a limp, but he’s rigid in his determination to uphold the law, whether that’s to protect the same Donovan from a lynch mob or to save a group of whites by agreeing to undergo the grueling death run.

Havelock’s life is complicated by the fact that the Governor’s daughter has been kidnapped. Beaten, shot, hurting, he vows to recapture the escaped Donovan, rescue the kidnapped girl, and recover the stolen gold. A tall order for any man. But Havelock isn’t any man. Vulture Gold’s scope is verging on the mythic. Havelock is a believable strong character, whose integrity can’t be bought or twisted.

Throughout this gripping narrative, you believe you’re there, in the heat and dust, mixing with the incorrigible Pappy Holmes, exchanging jibes with the Yavapai Indian, Horn Stalker, and outwitting the enigmatic yet quixotically honourable Juanito O’Rourke. There are characters aplenty in these pages, all fleshed out, not least Havelock’s faithful bucksin horse, Buck and the Apache chief, Puma. And there’s a girl, the half-sister of Donavan, just to create more confusion and send Havelock’s troubled heart beating that little bit quicker.

If you want a fast-paced, literate, authentic page-turning adventure, look no further. It also happens to be a western.
Posted by Nik Morton at Tuesday, March 01, 2011