The Giant book of the Western 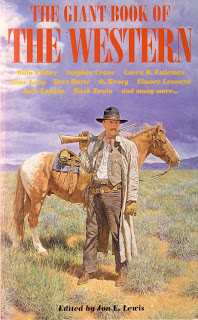 Published in 1991 as The Mammoth Book of the Western, this is a reprint dated 1995 with a slightly revised title.Superb cover!

Of late, there’s been talk about how revisionist westerns now deal with the Indians in a more balanced way. Yet the issue of the noble savage had been around quite a while, as editor Lewis points out in his introduction. ‘… amplified by the decision of the Curtis magazine group that the Indian point-of-view must not be shown in its journals, a decision which stemmed from the audience outrage that greeted Zane Gray’s fictional attempt in 1922 to depict a love affair between a white woman and Amerindian man, in Ladies’ Home Journal. From the 1950s, however, the American Indian began to be more sympathetically – and realistically – portrayed in the popular western…’