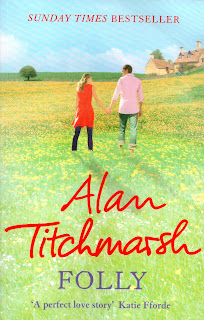 Alan Titchmarsh’s 2008 novel is a romantic story set across generations with a couple of twists.

He’s done this time-jumping before; it’s always a risk: maybe the reader will get confused or even lost. Here, it works well enough. The story begins in 2007 and concerns two long-established businesses in Bath – the Ballantynes and the Kings – both involved in the sale of artwork.

We fleetingly meet Jamie Ballantyne during an auction of some famous paintings, and Artemis (‘Missy’) King. He’s selling, she’s buying. They’d been friends for a long time and then she went off to the US and stayed for five years.

Then we step back into Oxford in 1949. There are four art students who go around together: the rich Honourable Leo Bedlington; John (‘Mac’) Macready, a Glaswegian; Harry Ballantyne; Richard King; and Eleanor Faraday. Both Harry and Richard desired her but neither did anything about it.

Jamie mulled about Missy and her appreciation of the painter Munnings. ‘Where dogs craved affection and cats demanded respect, horses inspired admiration and awe, and any artist who could catch their spirit seemed to her to be peerless. (p76).

In 2007 Missy’s grandfather is Richard and Jamie’s is Harry. Neither knows why, but their grandparents have been at loggerheads for almost sixty years! Nobody talks about it. Jamie’s mother has a streak of common sense to her: the feud’s ‘origins are lost in the mists of time and I think everyone would be better diverting their energies into today, rather than yesterday’ (p271). If only the ‘woke’ who want to rewrite history would listen!

Jamie and Missy reawaken their previous attraction and indeed fall in love. Yet the family feud threatens to confound them.

Skipping back and forth through time, we see how chances are lost, love is not reciprocated, and indeed the reader becomes irritated at the folly of these people who are incapable of revealing their true feelings. Except for Mac; he did just that, with disastrous results!

The descriptions of the period, the art world and the countryside sometimes verge on the poetic and at other times Titchmarsh delivers humour: ‘It seemed as if his inquisitor was in danger, at any moment, of bursting out of his clothes and sending buttons flying to the four corners of the book-lined room. All three chins wobbled as he made his point, and his cheeks were the colour and shade of Worcestor Pearmain apples… (p219).

The final twist was a mite too convenient but clearly Titchmarsh wanted to avoid an unhappy ending! An enjoyable novel, nevertheless.

I blame the editor:

When there only two characters in a scene, there is little need to constantly repeat their names to show who is speaking. In most cases, it will be obvious by what is being said. Also, ‘he said’ and ‘she said’ is adequate. There are a few instances of this issue; and one can be found on page 175.