Charles Cumming’s sixth espionage novel A Foreign Country was published in 2012. It’s the first of his I’ve read but it probably won’t be the last. Apparently he had a brief career in MI6 in the mid-1990s. It shows. 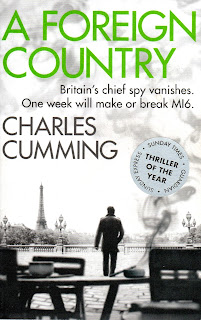 The story begins in Tunisia in 1978. Amelia Weldon had been hired to look after Jean-Marc Daumal’s children. She was also having a clandestine affair with him, under the nose of his wife Celine. And then one day she simply vanished.

That was the past.

(The book’s title is taken from L.P. Hartley’s first lines of The Go-Between: ‘The past is a foreign country: they do things differently there.’ It’s such a great observation, and has been utilised by many authors over the years. As an aside, it’s a pity that those today who wish to rewrite or expunge history don’t understand what Hartley meant.)

Then we come to the present. An elderly French couple are the victims of a brutal robbery and murder at Sharm-el-Sheikh. Seemingly unconnected, elsewhere, a kidnapping occurs. Oblivious to these happenings, Thomas Kell is at a loose end. He was a British agent who’d been ‘let go’ as a result of a failed mission. Yet he is now in demand again; he is asked to locate the prospective new head of MI6, Amelia Weldon who has inexplicably gone missing.

Jaded but competent, Kell sets about trying to track her down; no easy task. Here, now, we learn some of the tricks of the trade, and meet several duplicitous individuals who will help or hinder him. It is a tense, page-turning ride, with a few twists and turns to keep the interest heightened. The past tends have a tendency to bite back, and this narrative is no exception.

The final pages are a fitting book-end for the tale.

A Foreign Country was the winner of the Crime Writers’ Association’s Ian Fleming Steel Dagger for the best thriller of the year.