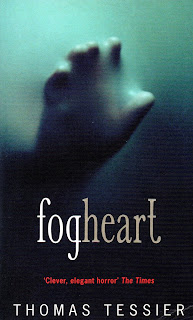 I was looking forward to this book by the author of Shockwaves, which was a tour-de-force in depicting an evil person. Published in 1997, Fogheart is a bit of a curate’s egg, with moments of suspense, yet I found the story disjointed.

Oliver’s wife Carrie starts to see the ghost of her long-dead father. Coincidentally, another couple, Charley and Jan, wrestle over messages from their dead daughter. With a mixture of scepticism and desperation, both couples seek enlightenment from the medium Oona, who has a troubled past. Eventually, deceit and murder loom, with hints of madness.

Strange, but it might appeal to fans of the supernatural.
Posted by Nik Morton at Sunday, October 04, 2020

Thanks for the review, Nik. Supernatural stories are always iffy with me. It takes an adept hand at keeping the narrative from slipping into cliché. I applaud writers that can pull it off. Shirley Jackson and Richard Matheson were two masters at the ghost story.

Thanks, David. (Just getting back into the swing of things...!) Yes, Matheson is one of my favourites.