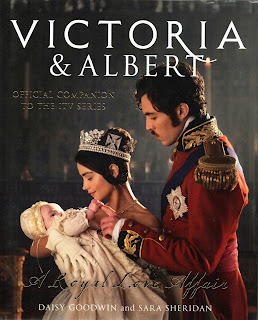 A sumptuous official companion to the TV series, this book (2017) is a pleasure to own and to read.

Co-written by Daisy Goodwin (the series’ excellent screenwriter) and historian Sara Sheridan, the book covers in 303 pages the relationship between the two royals and the many individuals who came into their orbit. It is complemented by many still photographs from the two seasons of Victoria and the Christmas special.

The TV series is not a historical documentary but a dramatised rendering of Queen Victoria, her husband Albert and others, and as such it does tinker with historical fact for dramatic effect; and the book highlights these divergences – whether that’s the close bond between Victoria and Lord Melbourne,  the actual age of the Duchess of Buccleuch (Victoria’s contemporary, not as depicted by Diana Rigg), or the good Dr Traill (Goodwin’s great-great-great-grandfather, in fact) who didn’t actually meet the Queen, and so on...

There are several behind-the-scenes insights, whether that’s the sets, the language used,  the costumes or the food

In addition there are articles on all manner of aspects Victorian: Sex for Sale, Racy Victorians behind closed doors, the language of flowers, pregnancy and childbirth, drug use, corsets, drinks, etiquette, beards, the railways, poverty, the Corn Laws, the Chartists, and the Irish potato famine.

In my view there is only one blemish, which a vigilant editor could have excised: a misguided statement by Goodwin. ‘One thing I feel quite sure of is that Victoria would have been appalled by Brexit. Victoria and Albert tried to create their own informal European union through strategic marriages of their children. Victoria may have been English to her fingertips, but she understood the value of a family of nations.’ (p247)

I would suspect that the truth would be the opposite. Victoria was proud of her Empire and would have loathed the fact that her country’s sovereignty had been discarded due to Prime Minister Major’s infatuation with the Maastricht Treaty in the 1990s. And of course Britain already had a family of nations – the Commonwealth – whose trade had to be adversely affected by membership of the European Union.

A superb book for anyone who has enjoyed the Victoria series.
Posted by Nik Morton at Sunday, October 21, 2018