There follows a small scene from CHILL OF THE SHADOW. An exorcism.
***
The church clock chimed eleven, each tolling of the hour resonating in the room.
“Oh, God, it’s time?” Father Joseph said.
“Yes, Father. Your hour is here.”
Father Joseph nodded, his holy stole draped round his neck. The Bible in one hand, he recited the Credo aloud three times. He carried around the room a censer containing a small amount of the burning Frankincense.
Maria’s eyes suddenly opened wide, staring, alarmed. But Michael didn’t recognize Maria in them.
The priest whispered, “Poor soul–”
“Now, Father, the water,” Michael said, his tone firm and commanding.
Putting down the censer, the priest picked up a large glass jug of holy water which he had consecrated in his church next door. He dipped a hyssop in the purifying liquid and sprinkled it over Maria, intoning, “I exorcise thee, O unclean spirit, in the name of the Father and of the Son and of the Holy Ghost.”
The response was immediate and startling. Maria’s body arched up from the bedsprings, and her flesh started to bead with a sickly green sweat.
“Stand firm, Father,” Michael commanded as an eldritch shriek erupted from Maria’s mouth. Then she slumped down, the bedsprings rattling, and was still again.
Father Joseph was trembling. “Dear God, will she survive this ordeal?”
Michael whispered, “The strain has been known to be so great that limbs have been dislocated. But I believe she isn’t fully possessed yet. The demons are not comfortable in her shell.” He waved a hand. “Again, Father.”
Father Joseph nodded and swallowed. Steeling himself, he stepped forward again. This time he was too quick, accidentally splashing Michael’s outstretched hand in the process. Three globules of water settled for a moment on the back of his hand, and then sizzled. Unconcerned, Michael shook the liquid off his hand; blisters, as if from an acid burn, appeared.
“My God, what manner of man are you?” Father Joseph said, almost dropping the jug of holy water.
“Just one of the good guys, Father.” He took a pair of black leather gloves from his jacket on the back of a chair and put them on. “Please continue. Maria’s life and soul are at stake.”
Father Joseph made the sign of the cross, and then sprinkled more holy water on Maria. “I exorcise thee, unclean spirit, in the name of Jesus Christ. Tremble, O Satan, enemy of the faith, thou foe of mankind who hast brought death to the world, and hast rebelled against justice, thou seducer of mankind, thou root of evil, source of avarice, discord and envy.”
“Stand back, it’s my turn,” Michael ordered, lighting the Paschal candle.
Very carefully, he lowered the flame to Maria’s naked flesh that still glistened with an unwholesome green sheen. “Get ready!”
There was a disconcerting flash of yellow and suddenly Maria was surrounded by a blazing transparent flame. It lasted for mere seconds and her body levitated this time, prevented from rising more than twelve inches by the ropes.
“May God break your teeth, vile spirit, and cut the veins of your neck and the sinews thereof. I bind you in the name of Gabriel and Michael, I bind you by these Angels!” wailed the priest. “May you vanish as smoke from before the wind for ever and ever, Amen!”
Maria shrieked horribly, and out of her mouth leapt a gout of thick bile, speckled with green and yellow and red. In its gross suddenness it resembled projectile vomit, but it was unlike it in colour, consistency and smell.
As the vile streamer left Maria’s mouth, Father Joseph leapt forward and thrust the crucifix he was holding over her mouth and held it there, while his eyes followed the terrifying manifestation across the room.
Defying gravity, the sliver of bile appeared sentient, moving toward the balcony door; it baulked inches from the array of crosses; it tried the window and door, and retreated. Wherever it travelled, it left a putrefying stench in its wake.
“Unbind the curse!” Father Joseph cried out and prayed again, louder, bellowing, commanding the evil spirit to leave in the name of the Blessed Virgin and the Holy Trinity.
The horrible thing made a beeline for Michael, as if divining that he carried no protective cross. In one swift motion Zondadari’s fingers hooked up the censer and swung it, catching the thing as if he were playing pelota. As the evil spirit sizzled and emitted a stomach-churning smell, Father Joseph left Maria’s side and poured the remainder of the holy water onto the mixture of cooking bile and Frankincense. The steam quickly dissipated, to leave a burned, brittle husk.
“And what the hell do you think you’re doing?” shrieked Maria from the bed, trying to tug her arms and legs free.
Michael crossed the room, picked up the sheet and draped it over her. He gazed into her eyes and after a long moment of study he smiled thinly, satisfied. “As it happens,” he said, “Hell has a lot to do with it.” He pulled out the Knife of Astarte and cut the rope securing her right wrist. “You’ve had quite an ordeal, Maria – but now you’re free.”
***
CHILL OF THE SHADOW
Available as an e-book and paperback here 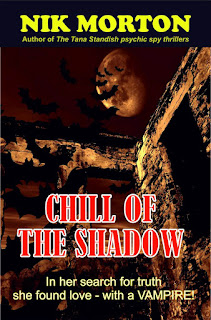