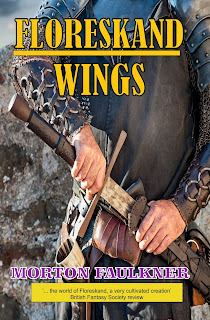 The sky above the city of Lornwater darkens as thousands of red tellars, the magnificent birds of the Overlord, wing their way towards Arisa.
Ulran discovers he must get to Arisa within seventy days and unlock the secret of the scheduled rites. He is joined in his quest by the ascetic Cobrora Fhord, who harbours a secret or two, and also the mighty warrior Courdour Alomar, who has his own reasons for going to Arisa. They learn more about each other – whether it’s the strange link Ulran has with the red tellar Scalrin, the lost love of Alomar, or the superstitious heart of Cobrora.
Plagued by assassins, forces of nature and magic, they cross the plains of Floreskand, combat Baronculer hordes, scale snow-clad Sonalume Mountains and penetrate the dark heart of Arisa. Here they uncover truth, evil and find pain and death.

“A fast-paced fantasy adventure as an innkeeper, a city dweller full of surprises, and a long-lived warrior, join forces in a race against time. Their quest is to save the red tellars, the giant birds, which are the wings of the overlord. Along the way even the weather becomes a powerful adversary and the three are tested almost beyond endurance. Tensions and evocative language keep the reader turning the pages to the very end!”- Anne E. Summers, author of The Singing Mountain
An expansive and well thought story, a must-read for lovers of magic and military fantasy. - Kate Marie Collins, best-selling author of Daughter of Hauk, Mark of the Successor and Son of Corse

This story has a complex yet well-structured plot presented in a relaxed writing style which easily draws the reader into an alien landscape whose topography, vegetation and inhabitants are described in almost affectionate detail… twists and turns in the presentation of the plot expand the telling of the tale and there are many duly woven into the pattern to enrich and excite the reader. The journey through the Sonalume Mountains has a strong element of authenticity to it, concentrating on the treacherous ice and snow coupled to an intense bitter cold. This seems to derive from an actual experience that must have been quite wretched at the time… This is quite clearly the first volume of what is intended to be an entire sequence of stories about the world of Floreskand, a very cultivated creation. - Nigel Robert Wilson, British Fantasy Society review

A beautiful and atmospheric tale. The author has skilfully developed the characters in a way that you feel you are right there with them on their quest. I can say that I have read many fantasy stories I have truly enjoyed, but only a few have left that lingering haunting feeling within me. – Amazon review

Great read. A well thought out book which is so descriptive you feel part of the story. A fantasy adventure that draws you into the quest. – Amazon review