Introductions to short story collections can seem a bit pretentious. Most readers just want to get on with the stories – which should speak for themselves. However, there are some readers who are interested in the origins of stories, even asking where do writers get their ideas. Well, they come from the ideas tree, of course. Seriously, though, I can’t promise to offer up the origins of all the stories in my collection Gifts from a Dead Race, but a few after-words here may be of interest – and if they’re not, then skip them.
I’ve also sold non-supernatural tales – twist-endings about adventure, the Mafia, plus romantic confession and romance – many under my original pen-name of Platen Syder, which was misspelled as ‘Playten Syder’ in at least two by-lines. But none of these have a place in this collection; other collections will cover those. The printing history for these stories ranges from 1972 to 2010)
ON A SHOUT was an attempt to highlight the bravery and dedication of fire-fighters, particularly during times of disaster – and nuclear war seems disastrous enough. It was touted for a British SF Association nomination many years ago. Cassandra Anthology was a popular magazine produced for love and not profit, as are many SF and Fantasy small press publications. It was good value for money but the increases in paper costs and printing spelled its doom. One young writer who honed his skill there went on to success as a popular children’s author.
GIFTS FROM A DEAD RACE started life as an explanation for the human appendix and was first written as a sexier and longer version and was accepted for publication in MEN ONLY, but due to editorial staff changes it never saw the light of day until featured in AUGURIES in a tamer offering. In the middle of last century there was a minor trend to whip out the appendix with the slightest excuse; the same applied to tonsils and adenoids. Over-zealous surgeons pre-empting any risk of appendicitis, since that had the potential to create a fatal infection; I’d extrapolated on that. For many years the appendix was considered a useless organ, a hangover from our evolution. Believed at one time it might have had a function, but is now vestigial. Yet according to a report (2017) published by a researcher of the Midwestern University in Arizona suggests that when the gut is affected by unwelcome bacteria the appendix can help good bacteria to grow and recolonise the digestive system. It seems the appendix has a higher concentration of lymphoid tissue, which is vital to the immune system.
Another story aimed at men’s magazines was turned down by PENTHOUSE because it addressed all the fears of the male readership; however, DON’T DRINK AND DRIVE was also accepted by MEN ONLY but it too never saw print until many years later on an excellent US webzine. Another story was accepted – by EXUBERANCE – but never printed, which is a pity as that too was in gestation for a long period and I thought I’d managed to get it right; so I’ve included THE ROSTRON ULTIMATUM.
CAN’T SEE THE WOOD FOR THE TREES was simply based on the old story of the drunk who told the police that a tree must have jumped out in front of his car. Only in this case, the tree was an alien...
MAN’S BEST FRIEND pushed the ‘what if?’ envelope at a time when it seemed many world leaders had pet dogs. What if the dogs could be controlled? A couple of bad puns are in there, too – and the hero had to have a dog breed’s name, of course! I’ve since used Pointer and his sergeant Basset in my ‘Avenging Cat’ series – ‘the dogs of law’, a play on Shakespeare’s phrase from Julius Caesar.
OH, WHAT A LOVELY SURPRISE isn’t very long but it contains enough menace to be effective, I think; it started as a 250-word competition entry to THE WRITER in the 1970s and received an honourable mention. Coincidentally, a film was made along similar lines about a year or so later.
THE FIRST IS THE WORST is also based on a time-worn phrase when someone’s expecting a baby and the question of the child’s sex crops up: ‘I don’t care what it is, so long as it’s healthy.’
There’s a dark side to love, too, and MEET THE WIFE examines that aspect in its few words; it too was based on a ‘what if?’ premise – ‘what if you had to celebrate Christmas Day early?’ At the time I was enjoying a reasonable success with action-adventure/ghost-horror short stories in Parade magazine; then a new editor took over and acceptances stopped – and not long after, they ceased publishing short stories entirely and another short story market bit the dust.
TEN YEARS HENCE started life in a serial in a ship’s newspaper, THE WARRIOR – for HMS ZULU – but it had no science fiction elements; it was one of my first ‘published’ pieces. It was gratifying for crew-members to ask me ‘what happens next?’ Many years later I re-wrote it about a futuristic Royal Navy and it sold first time out. Most stories set in the future transpose everything, so all dwellings are glistening, nothing is old, when of course civilisation and the real world isn’t like that – for example, there are still old manual typewriters being used even in the age of the word processor, Internet and txt mobile phones.
I decided to end this collection with A GIGANTIC LEAP, a variation on Armstrong’s words, when he landed on the moon all those years ago, when the promise of manned space exploration seemed a real possibility. 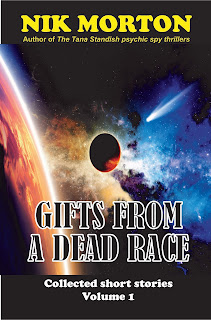 Other books in the series: