Brian Stableford’s series of six books concerning star-pilot Grainger and his spaceship The Hooded Swan begins with this novel, Halcyon Drift (1972); they’re regarded as classics by the science fiction fraternity. Stableford has written in excess of seventy novels; yes, he’s prolific. I met his mother when she briefly attended a few of my writers’ circle meetings here in Spain. A brief review of his book Young Blood appears here 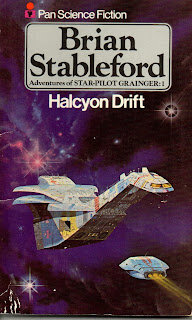 Stableford is a good writer who presents effective visuals with his prose: ‘Brown clouds move sullenly across the sulky face of the sky, washing the black mountain faces with hazy tears.’ (p7) Other examples from page 128: ‘Alien night is always a bad place to be.’ And ‘The horizon glowed white, surrounding us like a vast silvery ring set with a jewel-like flare at the point where the sun had vanished.’

The story begins with a prologue in the present tense, outlining the fact that Grainger has crashed his spaceship Javelin on an uninhabited rock, killing his partner, Lapthorn. So he’s alone.  The inhospitable place is plagued by winds, always blowing down the grave marker. Through his reminiscences, we get an insight into Grainger’s nomadic life with Lapthorn, trading and dealing from planet to planet, encountering fascinating and intriguing life-forms. Grainger is cynical: ‘A lot of spacemen are like me. Cold, emotionless men who don’t inherit any part of the worlds and the people that they see.’ (p13)  He reminisces about his friend Alachakh, a Khormon trader, whose life he saved once. That’s all he’s got, stranded on this rock for two years, waiting to die.

And then the wind starts to talk to him in his head. He isn’t going nuts: it’s an alien mind-parasite. It’s quite a lengthy prologue, ending with him being rescued by a passing ramrod ship, the Ella Marita. He gets away but he’s stuck with the mind-parasite – for life.

The rest of the tale is told in the usual past historic and it's inventive, in description and the alien life-forms, and in the leaps to a possible future: ‘I dialled through to the Illinois cybernet… a credit card, punched and banded, oozed out of a slot… I tapped out a query on the keyboard, asking how much the card was carrying…’ Bearing in mind this was written in 1972 or earlier: not bad. (I didn’t get my first credit card until 1987, when I was 39!)

There’s also irony and humour, to be enjoyed. Here’s the mind-parasite speaking in Grainger’s head: ‘I’m an expert on you, Grainger, and I’m learning more all the time. I’m right inside you. I’m with you every decision you take. I’m riding your every thought, and feeling everything you feel. This isn’t the most comfortable of minds to live in, my friend. I would appreciate it greatly if you could get it sorted out a little. Come to terms with yourself and the universe.’ (p34)

The nameless mind-parasite isn’t the only great invention in this story. Meet The Hooded Swan, a ship that can fly ‘like a bird. She’s jointed and musculated. She has the most complete and most sensitive nerve-net any mechanical device has ever had.…’ In fact, Grainger the pilot is connected to the nerve-system of the spaceship and feels what the craft feels; his body becomes part of the body of the ship. Grainger literally flies by feel.

One of the several inventions is the quite tragic Khormon race. When these people have filled their memories – nothing is ever forgotten – they have reached their end. As Alachakh says, ‘I wish I could forget a little and create some space, but I cannot. I am stuck in the day before yesterday. There can be no question of a long tomorrow, and I doubt the latter hours of today. Soon even the minute swill become painful to squeeze away into tight corners…” (p89) Another invention is the metamorphic life system Grainger encounters in his quest: ‘Our presence and progress would cause the plants which we touched unbearable pain.’ And: ‘… the feel of the furtive, glutinous chaos through which we moved. Myriads of tiny creatures were accidentally transferred from the plants to me, and I hoped none of them was adapted for chewing tough plastic.’ (p134)

Grainger is hired to pilot The Hooded Swan and enter the Halcyon Drift in search of a spaceship that was lost in the drift eighty years ago; a distress signal has bleeped since then but due to the awesome peculiarities of the drift it hasn’t been located yet: ‘Drift space casually disobeys principles which are called laws in saner corners of the galaxy.’ (p97)

Perhaps the ending was a little rushed, but he was writing to fit into a specific format. How Grainger resolves his quest is intriguing – and moral, to boot. Needless to say, he survives to fly The Hooded Swan in another novel, and I’ll be reading all of the series.