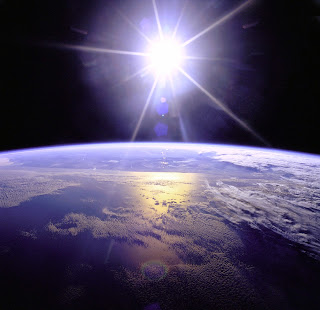 
No, I’m not writing an apocalyptic sci-fi story about a country cast adrift amidst the Islets of Langerhans… This post is about an interesting blog relating to expats with a creative bent.


I’ve been an expat writer for 11 years, ever since my wife and I left England for the Costa Blanca. The beauty of being a freelance writer is that the work can be done almost anywhere and at any time. Naturally, there may be commitments, deadlines occasionally – but they’re self-imposed. Nobody tells me to write. I do it because I am driven to write.


The popular image of expat writers is probably an author sitting on a balcony with the sun blazing, the sky a brilliant azure, the garden a riot of colour, the typewriter clacking away next to the tray of drinks… The truth is more prosaic: working at a computer keyboard indoors, perhaps with an infrequent stroll in the garden to avoid DVT; and of course alcohol and creativity don’t mix too well, either.


Expat writers the world over can and do gain insight into their adopted countries, using the once-removed perspective of an outsider looking in. And their writing can be most enlightening.


Which brings me to a fascinating blog entitled The Displaced Nation. Its sub-title is ‘A home for International Creatives’. In its first four years of existence it has built up an impressive array of features, interviews, and columns.  One of these is the location-locution column:


Browse through the earlier interviews and you’ll be transported to far-flung places – China, Germany, and Switzerland for example. They’re the expat writers, scribes with wanderlust, but you can also read about artists and photographers in another column. In fact, there’s plenty here to grab your attention for quite a while; take a look.

Memory is a fascinating trickster. Words and images have enormous power and can easily displace actual experience over the years. See the link below for more info.