No, that title isn't a typing error...


The Island of Dr Death and Other Stories and other stories by Gene Wolf was published in 1980, an amusing and even playful title to this collection of his short stories. 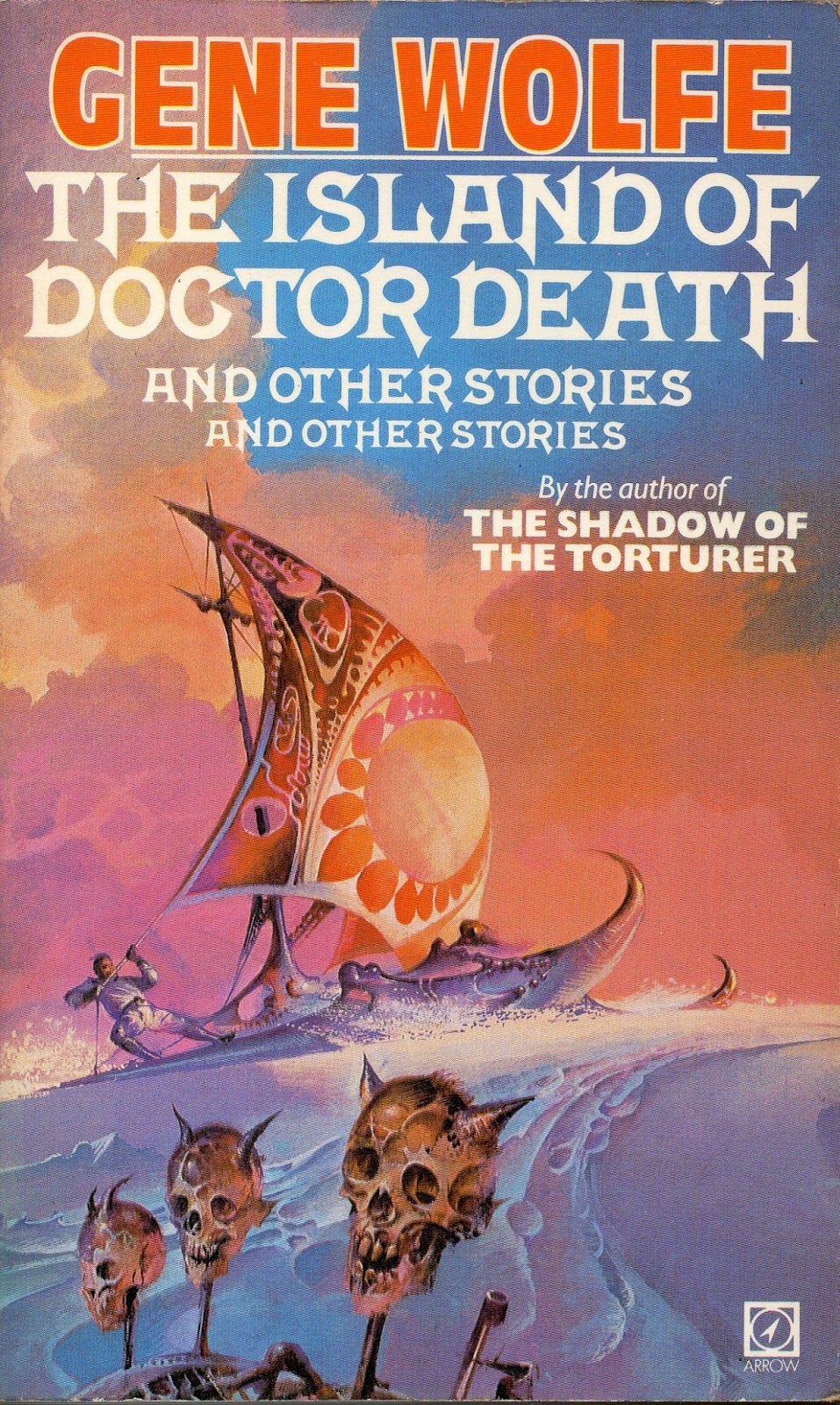 ‘The Island of Doctor Death and Other Stories’ is the first of three tales in which Island, Doctor and Death figure – an intriguing and bizarre trinity. Wolfe’s main character – a boy – discovers another world within the covers of a pulp book similar to Edgar Rice Burroughs and Robert E. Howard; the book is somewhere to escape to, to hide in, for no matter how horrible the events or scenes, they beckon tantalisingly, more preferable than the materialistic, often mundane, sensual-swamped world his neglectful mother inhabits.


‘Alien Stones’ is a complete departure: an alien space vehicle has been discovered, apparently empty. Partly a mystery, there is little action, but the personalities hold, as does the immense alien ship: an empathist who fails to know the aliens, a Captain who has an unusual younger alter-ego. Reality is questioned, and the story concludes with the old puzzle: can two alien cultures draw together and learn?


‘La Befana’ and ‘The Toy Theatre’ are short-shorts with appropriate twists in their tails.


‘The Hero as Werewolf’ creates a post-catastrophe world in which mutants roam and lycanthropy is commonplace. A dark gruesome piece – the streets depressing and claustrophobic, the characters shot through with pathos.


‘The Death of Doctor Island’ features a boy who is to undergo psychotherapy, his doctor being the island upon which he awakes. It is also a study in psychopathology and schizophrenia. The Island’s construction, the psychological insights and the empathy all work. This won a Nebula award.


Besides delving into the origins of myth, ‘Feathered Tigers’ is a metaphor for the lost cultures of the Earth, destroyed by man’s ‘progress’. The ending may be predictable, but the journey is worthwhile.


In ‘Hour of Trust’ Wolfe employs his ironic humour to good effect, where the War of Commerce has reached terrible proportions. International conglomerates employ weaponry and terrorist tactics in their sales drives! It reminded me slightly of James Tiptree’s ‘Birth of a Salesman’ – though with less overt humour; they both work on a basic premise and stretch it just far enough without going over the top; well done, with a sanguine ending.


One of the longest stories is ‘Tracking Song’, evoking a world of cold wastes with great eloquence. The narrator shows us he is in a technological era, but apart from the machine into which he dictates, there is no further evidence until the end. The land is sparsely populated by characters similar to those in North American Indian mythology, yet the narrator feels alien. He sets out on a quest of curiosity and discovery – a poetic trek, with a mystical ending that seems about right. 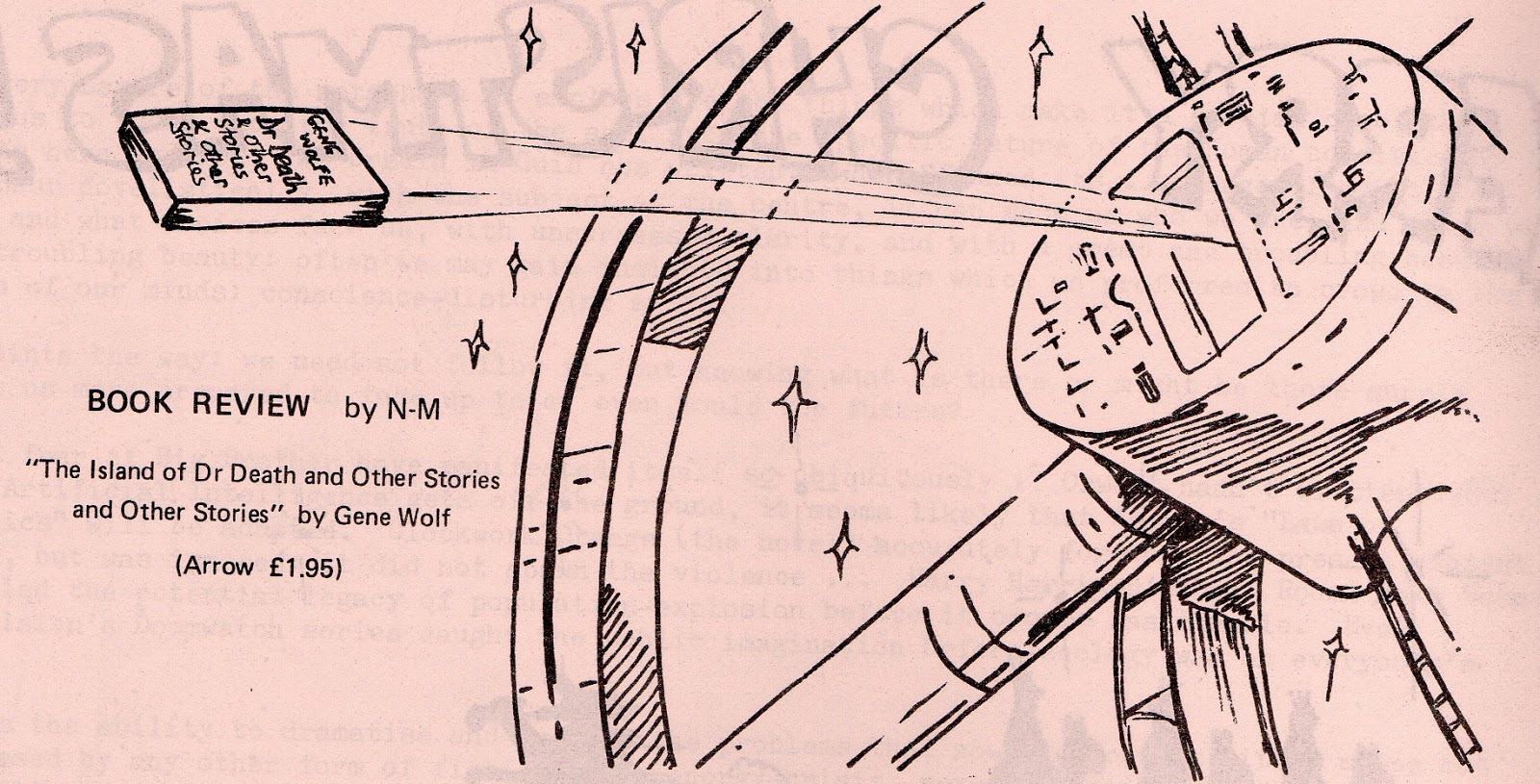 Last of the sequence is ‘The Doctor of Death Island’ which reveals the problems of immortality and cryogenic resurrection. The hero invented talking books and paperworks which made it possible ‘to employ a great number of persons who are close to functional illiteracy. Reading, today, is something of a speciality’.

‘Cues' is a rather long pun – and little fun. But next comes fifty-eight pages of ‘The Eyeflash Miracles’ – in my opinion worth buying the book for this story alone. It tells of a blind boy who has hallucinations populated by characters who help him to see. The characters and situations in the story have some Dickens, Bradbury and Baum in them, but the magical prose is pure Wolfe and a delight to read.

The last story, ‘Seven American Nights’ is an interesting, never dull travelogue with a 19th century flavour, written in diary-form, reminiscent of Jonathan Harker’s Journal in Dracula. And the discoveries are every bit as terrible. North America cities after are crammed with disease riddled beggars, street-sellers hawking physical and materialistic delights. The West has fallen and the Byzantine culture has resurfaced, superior, refined.  But this refinement has eased out risk and adventure, the narrator’s spirits are low, so he is drawn to exotic divertissement, with forbidding potential…

Not one story spells things out: the reader has to work, and is rewarded: total immersion in a variety of brilliantly described lands; and the atmosphere of each clings, memorable, haunting almost.  I recommend that you walk these wondrous, humane, ironic, bleak, always different pathways.

There's a fourth death/island/doctor story, I believe collected in "Storeys From the Old Hotel". Called "Death of the Island Doctor" (if I remember correctly), it's more or less a romance and character study, and not really SF.

One of my favorite writers and a great collection. reread it for the 3rd or 4th time last year.

Thanks for responding, Steve. Graham, you remember correctly - here's a link
http://en.wikipedia.org/wiki/Storeys_from_the_Old_Hotel