It’s many years since I read this. I rarely have the opportunity to re-read books, even favourites, as I own so many I still have to read even once. It was a pleasure to reacquaint myself with Elizabeth, Jane, Lydia, Mr & Mrs Bennett and of course Darcy. I made a point of re-reading this after viewing the BBC television series featuring Jennifer Ehle and Colin Firth as the star-crossed lovers (filmed in 1995). There have been many versions before and since, but in my view this – perhaps due to its generous length – captures the book most perfectly. 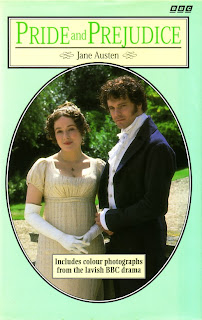 It isn’t surprising that the book has been popular ever since its publication in 1813, as the wit and spirit of Elizabeth captivates readers of all ages. Typical of its period, the book uses the omniscient point of view, but it works thanks to the easy style and humour of Austen. The title of the book originally was First Impressions but was changed to reflect a quotation from Fanny Burney’s novel Cecilia, when the lovers are united and the author declares that ‘the whole of this unfortunate business has been the result of pride and prejudice.’
Considering her small output, Austen’s works have been dramatized a remarkable number of times and have been forever in print and in the hearts of romantics worldwide.
The first paragraph of Pride and Prejudice has been quoted time and again and is certainly one of the most famous beginnings of any novel: ‘It is a truth universally acknowledged, that a single man in possession of a good fortune, must be in want of a wife.’ That, in a nutshell, is what the book’s plot is about – Mrs Bennett finding suitable men for her daughters to marry. Well, on the surface, of course. It’s more subversive than that, however. It reveals Elizabeth as a strong-willed woman of independent mind if not means. And it’s a book about the enigmatic Darcy, too – a man who is tired of the artifice of his female acquaintances and finds himself stirred by the alarmingly refreshing Elizabeth Bennett.
All of the characters spring alive, thanks to Elizabeth’s acute observations, whether they be her scatter-brained mother, detached father, the odious Mr Collins or the dreadful Lady Catherine de Bourgh. In the main, their characters are conveyed by their speech, and it’s masterfully done.
This book (1995) also features stills from the TV episodes.


Editor’s note: even classics can suffer from typos – and I don’t mean the old spellings of ancles (ankles), chuse (choose), your's (yours) and the like. There are at least twenty to be found in this copy. Whether they’ve been around since 1813 or introduced at subsequent reprinting, when books were typeset, I cannot say. Regardless, the typos don’t interfere with the reading enjoyment.
Posted by Nik Morton at Friday, April 12, 2013

Austen's popularity knows no end. I have read the book but haven't seen this adaptation. Thanks for the suggestion, Nik.

It's an excellent adaptation, David. I'll post on this shortly. Thanks!