Book of the Film: The Shawshank Redemption 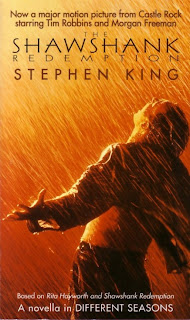 Rita Hayworth and Shawshank Redemption is one of four novellas in the book Different Seasons by Stephen King, published in 1982. The film was released twelve years later. When I was studying scriptwriting, I was bowled over by the sheer perfection of Frank Darabont’s script, from the brilliant opening sequence through to the wonderfully emotional end. Indeed, while the novella is a virtuoso performance, King getting into the skin of the narrator ‘Red’, the movie surpasses the book in its storytelling power and characterisation. That doesn’t take away anything from the original source, however: the book deserves to be read and certain passages will move most readers, even when they know the story behind the Rita Hayworth poster…

I’m not a fan of prison movies and it was quite a while before I got round to watching the film. And I read the novella much later. As a writer myself, I can see that King cleverly has his cake and eats it too. Although the story is told in the first person, we see a lot of events where Red was not a participant or observer, thanks to the canny comment that the prison grapevine provided him with all the salient details.

As with a number of films, several characters are blended together, and successfully so. The fates of Tommy Williams and Brooks Hatlen are different in the book. The book’s ending shows merely the promise of what is actually revealed in the film.

Just in case some readers haven’t seen the film, the story goes something like this: In 1947, Andy Dufresne was charged and sentenced for murdering his wife and her lover. He never contested the prosecution’s facts. Andy became a new inmate in the Shawshank facility and was taken under the wing of Red, the prison fixer who could get almost anything smuggled in – except women, drugs and guns.

The prison regime was brutal and unpleasant, with the warden and his men wangling deals to feather their own pockets at the expense of the cons. As if that wasn’t bad enough, a gang of so-called ‘sisters’ who were brutish rapists targeted Andy, and though he fought back, he suffered many defeats and humiliations. But they never broke his spirit or dented his hope in one day walking out of the prison. Red admired Andy and they became firm friends.

Red the narrator is humorous, worldly wise and very observant, and totally believable in King’s hands. In the book’s Afterword, King states that his prose style is ‘fairly plain, not very literary, and sometimes downright clumsy.’ He considers his work to be the ‘literary equivalent of a Big Mac and a large fries from McDonald’s.’ I’m sure that many of his critics would agree with him. And yet, he taps into the hearts and minds of thousands of readers with that same prose. As he writes at the beginning of the book, ‘It is the tale, not he who tells it.’ And the story is all – comprising vivid characters, a fraught situation, raw emotion and the small guy hoping and working to beat the odds. That comes through in the book.

So, if you’ve seen the film but haven’t read the book, make that journey. You’ll be rewarded by finding a lot of nuggets plucked by Darabont to enliven his masterpiece film, and you’ll come away knowing that the naysaying critics of Stephen King are so wrong.
Posted by Nik Morton at Sunday, September 27, 2009