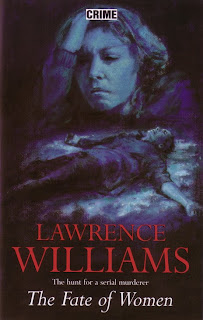 As I'm a Robert Hale author, I thought it's about time I reviewed some of that esteemed publisher's books here. Naturally, I've been doing this for the westerns, but now I'm branching out.

First up, then, The Fate of Women by Lawrence Williams (2007). It's a gripping and well-written crime novel that resonates even after the end. DS Jack Bull is a tough, no-holds-barred copper, a bit of an anachronism in today’s police. But even his superiors acknowledge he gets things done. So he is recruited into SIU, the Serious Incident Unit, a shadowy police group that has UK-wide influence and powers. Jack has a history of womanising and now ironically he is being asked to find and arrest a serial killer who is killing released rapists. Jack is tasked with becoming Jake Corelli, a rapist liable to be next on the killer’s list. He is the bait, no less. Yet his attitude is ambivalent, particularly after he meets some rapist victims, because his sympathies lie entirely with these damaged women.

Authors especially may be interested in the fact that the narrative begins in the present tense, first person, from Jack’s viewpoint. Then it's first person historic, quite normal, and then we perceive his world in the third person as Corelli. Finally, we return to Jack’s perceptions in first person historic. There was the risk that this shifting of point of view could jar, but within a short time it seems to work and the reader inhabits the mind-set of Jack and even his alter ego Jake. Throughout, there is a sense of brooding doom hovering, not helped by the manipulative machinations of Jack’s bosses, Mr Stone with the metal hand and Mr Frimmer.

There are plenty of grim insights into Jack’s past and why he has no illusions about his unmarried place in the world he inhabits. ‘… the corrupting effect of being a police officer…; the poison of it wrecking marriages, breaking those apparently well-ordered homes to which colleagues returned drained and contaminated.’

Williams’s wry observations of characters raise a smile too. ‘… lost the salesman’s consolation of believing his own sales talk. He knows himself a hewer of wood in a plastic age.’ Succinct but illuminating. A number of characters are drawn with great wit and sympathy, notably the landlady and her small clientele. The light and ironic touches are welcome because, of course, the subject matter is grim. As Jack observes, ‘the murder victim knows no consequences; the rape victim lives them for ever.’

Sadly, even in this so-called enlightened age, some men believe it is the fate of women to be forced into becoming unwilling vessels of pleasure. This tale, a strong and deeply felt indictment against such primitive attitudes, concludes on a note of compassion amidst the violence. Strong stuff.
Posted by Nik Morton at Saturday, March 28, 2009