This is a slim sci-fi volume from the prolific pen of Garnett Elliott, comprising three short stories, some 80 pages of fast-paced action. 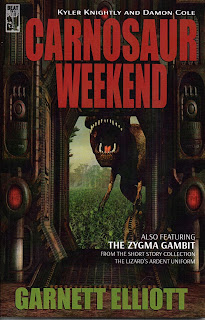 It’s the future, about 2223 AD. Human history has taken some knocks – but was intact, though only thanks to  Continuity Inc, an organisation that snapped up the contract going begging when the government Time Corps was deregulated. Continuity Inc agents are dedicated to protecting human history. And it needs protecting since the discovery of time travel using a Zygma projector.

Continuity Inc’s headquarters had been based within the lava tunnels of the Kerguelen Plateau, a micro-continent submerged beneath the Indian Ocean. However, funding sources had slashed their budget and the entire operation had been moved to a renovated theatre in London’s West End.

Two agents of Continuity Inc are Kyler Knightly and his uncle, Damon Cole.  In ‘Carnosaur Weekend’ they’re investigating some real estate developers who had somehow obtained a Zygma projector and were offering ultra-modern homes in prehistoric earth; ‘no breathing apparatus required, golf, swimming, and tennis amenities, against a breath-taking backdrop of megaflora and fauna’ – that includes dinosaurs!

This story could have been called ‘Carnosaur Carnage’ because there’s plenty of blood and gore to satisfy the most blood-thirsty palate.  There’s also humour and satire thrown in for good measure. It goes beyond Ray Bradbury’s ‘A Sound of Thunder’.

In this future, people seem attracted by others’ wealth – 2.2 billion SMU (Standard Monetary Units). Physical attraction has relevance, too, though those who can afford it can buy their muscles and good looks. ‘… somewhere beneath that dress, Kyler felt certain, there were scars from multiple organ transplants, and injection sites for anagathics.’

Kyler is also a Dreamer, someone gifted or cursed with dreaming of events that might happen. It can be useful – or frustrating. When things go pear-shaped, he couldn’t have thought in his wildest dreams what would happen…

In ‘The Zygma Gambit’ Kyler dreams that his uncle is at risk of sabotage on his next time jaunt.  As Damon disagrees, Kyler takes matters into his own hands and becomes his uncle’s substitute and projects to the fourth moon of Caliban, 2750 AD. This jaunt is essential to the continuity of the Zygma project. But there’s a conspiracy and it threatens not only Kyler, his uncle, but the entire project. A slick twist ending.

The third story is a bonus, a non-Zygma tale, ‘The Worms of Terpsichore’, the kind of horror sci-fi that inspired countless B-movies. The space ship crew of Astarte is investigating the loss of the Sallust on the blue planet Terpsichore Five. What they encounter is gruesome and insidious, and the worms of the title are truly nasty pieces of work.

I’ve posted a shorter version of this review on Amazon.

Thank you, Nik, for your thoughtful review. Garnett remains one of the finest writers I've ever had the pleasure to work with—kinda like another author I know that lives in Spain.

Good review, Nik. I think you nailed all the elements right there. Thanks for giving Carnosaur a read.

Many thanks, Garnett. A pleasure. An entertaining read.

You lost me with Zygma projector.

Thanks for the feedback, Charles. Lost in time, Oscar, I guess? :)