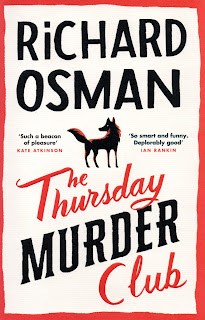 Richard Osman’s debut novel (published 2020) is a delight. Most of the action takes place in a peaceful retirement village Coopers Chase in the heart of the Kentish Weald of present-day England. As we know, many developers don’t go in for apostrophes, so this one is no exception. The land, which once belonged to a convent, was purchased from the Catholic Church; the convent is now Willows, a nursing home for the village. Nearby is the graveyard, crammed with interred nuns.

A variety of clubs have been formed by the residents. Among them is the Thursday Murder Club set up by Elizabeth and Penny: here they discuss cold cases. Penny had been an inspector in the Kent Police and acquired the old files before retiring. ‘After a certain age, you can pretty much do whatever takes your fancy. No one tells you off, except for your doctors and your children’ (p18). [This was written before Covid-19 lunacy, of course. Now it seems police are quite content to handcuff septuagenarians for the slightest of reasons.] Other Murder Club members are Ibrahim, a psychiatrist who hails from Egypt; Ron, a trades union official who ‘never believes a single word anyone ever tells him’ (p19); and Joyce, the newcomer, an ex-nurse who has taken Penny’s place since the latter was now in Willows.

However, a brutal murder occurs – a bludgeoning – that warrants this quartet’s involvement. Much to the initial chagrin of DCI Chris Hudson and PC Donna De Freitas, they begin to uncover salient clues… Before long there is a second murder, and a baffling cold case becomes a bone of contention also.

The character of each club member is distinct, and all have something useful to add to the case. Elizabeth is the natural leader; she was something important in secret intelligence during the Cold War and has many useful contacts, reminding me a little of  Mrs Pargeter.

There are plenty of red herrings and some clever misdirection, none of it seeming contrived.  The over-riding feeling on reading this is one of quiet pleasure. There are moments of poignancy, as you’d perhaps expect in this kind of environment, but also humour and even farce.  One of the quotations the publishers used is ‘Robert Galbraith meets Tom Sharpe,’ which is absurd. The humour is gentle, witty and kindly meant. If I had to reference comparable writers, I’d opt for Henry Cecil, Richard Gordon and Simon Brett (the Mrs Pargeter novels), though Mr Osman’s style and wit are definitely his own.

Among the many potential quotations that give a flavour of a sense of heartfelt kindness that flows throughout, I’ll simply offer two:

As Joyce says, ‘In life you have to learn to count the good days. You have to tuck them in your pocket and carry them around with you.’ (p88)

The book is written in the third person present tense from an omniscient point of view, interspersed with first person diary entries by Joyce. And it works exceedingly well.

A sequel is already planned for publication for next autumn.