This is the second article offering some illumination on several background inspirations for Coffin for Cash (published 2015 by Beat to a Pulp).

‘Long before they reached the entrance to the casino complex, Cash and Corman rode past dozens of white-painted wooden posts, all lined up neatly: “Setting out the lots for the baron’s town plan,” Corman explained.

‘Finally, an entrance arch of Doric columns declared “The Lenore Casino”. From here curved a wide drive bordered with sagebrush flowering yellow, red, pink and orange; mixed with these were sego lily and larkspur. The drive led to a long two-story building, its veranda graced with a series of Corinthian columns. A rooftop terrace commanded a view of the surrounding countryside, and above the entrance doors, rising from the center, was a latticework tower with a huge clock-face showing Roman numerals; a big metal pendulum swung below, partly visible through a long narrow window above the entrance.

‘They tethered the horses at hitching rail at the front steps.

‘A good distance away on their right was a marble edifice, with a life-size winged angel on top.

‘“That’s the baron’s little mausoleum,” Corman explained, his voice thick and laced with gravel. “It’s where his wife’s buried – minus her heart.”’ (Coffin for Cash, p70)

Kempelen’s casino was based on the Prussian nobleman Count James Pourtales’s Broadmoor Casino near Pikes Peak in central Colorado. There is no resemblance between the fictional baron and the real Count Pourtales.

Pourtales was smitten since he first met his cousin Berthe in Prussia. Apparently they married young in those days: he wed Berthe in 1866, when she was fourteen and he was about the same age!

On reaching maturity, he was anxious to find some good investments to build upon his inherited wealth in Europe and found himself in Colorado, where, in 1887 he bought a failing dairy farm – about 2,000 acres – called the Broadmoor, intending to make money by selling milk and butter to the nearby growing town of Colorado Springs. As that didn’t work out so well, he then decided to establish a resort town on that land, calling it Broadmoor City. He built a dam to create a lake and felt that nearby Cheyenne Mountain would be a big beautiful attraction.

Seeking to lure prospective buyers to purchase lots, he built a pleasure palace, the Broadmoor Casino upon the dam.

The casino was enormous and grand, some 244ft alongside an artificial lake stocked with trout.

There were thirty-two Corinthian columns and it had a rooftop terrace.

The double staircase led to a grand ballroom and concert hall, three dining rooms and a salon for the ladies, plus two game rooms. There was a resident orchestra and he had acquired a French chef.

He installed gaming rooms on the first floor but intended making his profit on the sale of liquor since nearby Colorado Springs was a dry town. Whiskey was only sold as medicine in drug stores; there might have been a lot of people needing medicine, we can imagine.

The opening was on July 1, 1891. By the Fourth of July more than 15,000 people had visited the resort. Unfortunately, there were not many buyers of plots and, some eighteen months later, Colorado’s silver mining was affected by the financial panic of ’93. Pourtales declared bankruptcy. Four years afterwards, in 1897, the Broadmoor Casino was destroyed in a fire which started in the kitchen; witnesses reported hearing the booming of barrels of wines and liquors stored in the cellars.

While visiting Italy in 1908 the count died unexpectedly, aged 54; Berthe pre-deceased him in 1905. 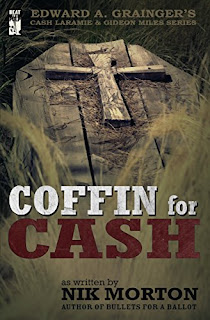 Cash Laramie has been in plenty of tight spots, but this – being buried alive – may be his last!

It all started innocently enough, as a favor for his boss, accompanying a rich woman in her search for her brother. The trail leads to The Bells, a strange hotel run by a brother and sister team, which just happens to be adjacent to the funeral parlor and cemetery...

His friend Miles is nearby, intent on escorting a suspected murderer to Cheyenne for trial. Yet Miles discovers that his charge might be not guilty, after all, and lingers to ask questions. And those inquiries mean upsetting some people, which leads to an ambush, and a final reckoning at the outlandish casino complex constructed by a wealthy bigoted German baron.

Throw into the mix the attractive Berenice, a schizophrenic bank manager, irate miners, Chinese workers, a boisterous slot machine salesman, and a devious lawyer and you have another explosive adventure for the Outlaw Marshal.
Posted by Nik Morton at Thursday, July 30, 2020